Pacers’ Oladipo set for 1st game after recovery from injury 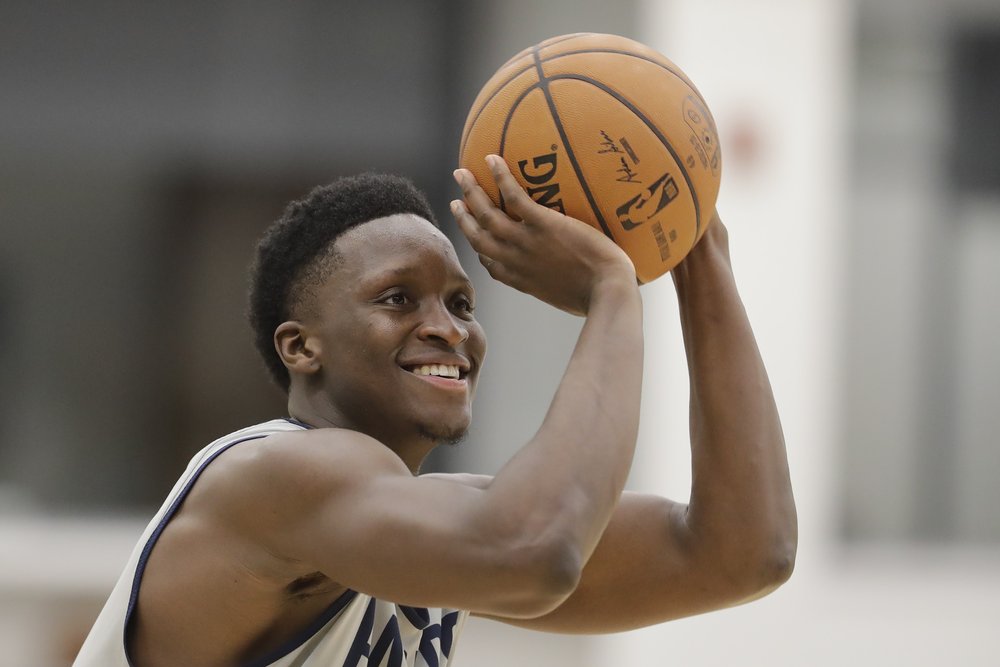 Victor Oladipo spent 12 months working, wondering and watching. He strengthened his body, his mind, his injured right knee and promised to return a better player.

“I don’t expect to do anything out there miraculous, I just expect to play basketball to the best of my ability,” he said Tuesday. “I know I’ll get better as time goes on and I’ve got to be patient with my body and patient with the game. But I’m a competitor. I know it isn’t going to be easy.”

Oladipo probably knew that much the moment he couldn’t get up after crashing to the floor late in the first half of last January’s game against Toronto.

He left the court on a stretcher amid a crescendo of cheers from his adoring fans.

Players around the league quickly took to social media to offer their encouragement, too.

By the time he returned to practice, at training camp, the Pacers had a revamped roster.

They acquired three new starters during the offseason — Malcolm Brogdon, Jeremy Lamb and T.J. Warren — and added forward Domantas Sabonis to the lineup.

“I was trying to get as much as I could out of my rehab so eventually I could have a day like (Wednesday),” Oladipo said.

The Pacers will play it safe with their top star, at least initially.

Coach Nate McMillan told reporters Tuesday that Oladipo’s minutes will be limited until after the All-Star break. He declined to provide specifics and wouldn’t say whether Oladipo would start or come off the bench against the Bulls.

But with Indiana holding the No. 5 spot in the Eastern Conference, at 30-17, and just 2 1/2 games out of the No. 2 spot without Oladipo, there’s no need to push him back.

“This will be the first time we have all of our guys back and all of us are going to have to sacrifice, even Victor,” McMillan said, citing an extraordinarily large media contingent at practice as an indication of what will be different. “It’s not going to be all about Victor. It’s about us. Roles are going to change. The rotation is going to change. So you can embrace it or you can go against it. I expect us to embrace it.”

Adjusting on the fly is part of the basketball business.

Philadelphia center Joel Embiid was cleared to play Tuesday after missing three weeks with a dislocated finger on his left hand. The Golden State Warriors could get Stephen Curry (broken left hand) back following the All-Star break. Klay Thompson also remains out with a torn ACL in his left knee.

For Oladipo, the obstacles have been daunting.

“Getting my range of motion back was the most unique thing I’ve ever had to do in my life, learning how to force yourself to bend your knee,” he said. “Every morning for a month or month and a half, I was waking up with a rope trying to pull my knee to my butt in excruciating pain. It’s like, do you really have to teach your knee how to bend again?”

Yet, here he is 371 days later, wearing white padded sleeves over his knees, shooting 3-pointers and still laughing and singing. His mother and sister are already in town to watch the big return and some friends will join them Wednesday, too.

But all that time away from the game also has helped Oladipo develop new perspective on life.

All those well wishers, who offered support and prayers, helped Oladipo understand the value he has on and off the court. The long journey back forced him to become even more patience, a trait that could come in handy as he tries to regain his pre-injury form.

“Whenever you’ve been off for that long, you don’t just come back,” McMillan said. “A year is a long time and it takes you a while to get your timing and rhythm, your feel and trust. All of that takes some time. So I don’t expect him to be the Victor of old tomorrow. I expect him to go out and play.”

One dead after cyclist hit by car in Fort Wayne