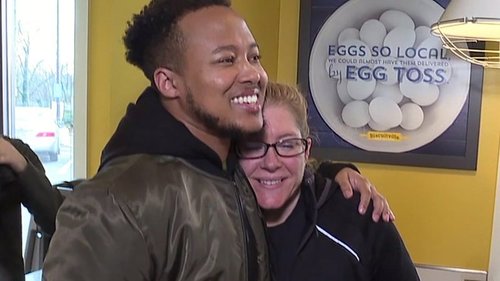 A Good Samaritan will enjoy free breakfast for a year after rescuing an 8-year-old girl from a potential kidnapper.

GREENSBORO, NC (WGHP) -- A Good Samaritan will enjoy free breakfast for a year after rescuing an 8-year-old girl from a potential kidnapper.

Cody Byrd, a North Carolina A&T University graduate student studying computer science, is being praised as a hero after he stepped in when a man, Timothy Fry, allegedly tried to grab the girl at the Biscuitville on West Market Street.

Police say Fry admitted to an officer that he intended to kidnap the girl and that he found her sexually attractive.

It was a typical day off from school when Heather Owen and her daughter, Madeline, were at Biscuitville.

Like clockwork, her mother says, Madeline always has to use to the restroom when they get their food.

As Madeline ran off to the restroom, Owen noticed a man sitting next to them that appeared to be watching the girl. The man then got up and walked towards the bathroom.

"I was just kind of leaning like this, just to kind of peek around the corner at her," she said. "I saw him standing against the wall like this, and you don't want to pre-judge anybody 'cause that happens a lot nowadays. I was like, 'Well, maybe he really is going to use the bathroom.'"

At the same time, Byrd got up and went around the corner.

"It’s the kind of vibe he was putting off," Byrd said. "The fact that when I came in, he was just staring at the girl, and he was just so focused on her. And then once he got up to go to the bathroom right out there (where) she went, that's when I was like, 'Okay, I'm already not feeling right about this.'"

It's a good thing he did because moments later Byrd was ready to save that girl.

Byrd managed to snap a photo of the attempted kidnapper as he ran out of the door and snapped a photo of the truck he got into, including the license plate.

Thanks to Byrd's help, within a couple hours Fry was arrested as a suspect.

Representatives of Biscuitville presented Byrd with a Good Citizen Award on Tuesday at the restaurant and also awarded him with free breakfast for a year.

"I just really want Cody to be sure that he realizes how appreciative we are as a brand and that we certainly do recognize what he did and it's no small thing," said Kristie Mitchell, vice president of brand and marketing at Biscuitville. "And so, it was worth the time to stop just to say thank you to him and to be extremely grateful for Cody."

Here's what we know in the search for Brian Laundrie