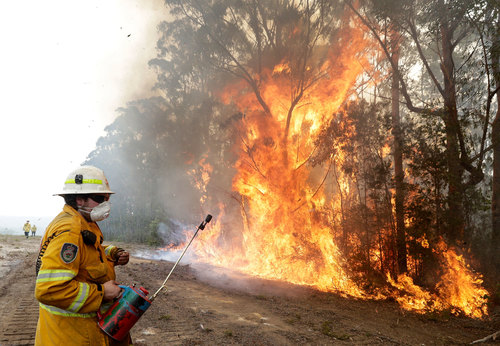 Siemens is taking heat for sticking with a controversial coal mining project in...

Siemens is taking heat for sticking with a controversial coal mining project in fire-ravaged Australia. Its response? Give young people the power to veto future business on environmental grounds.

In an open letter dated Sunday, CEO Joe Kaeser said the German engineering group would establish a new committee that includes young people from outside the company to "give environmental concerns even more priority and attention in the future." The committee will be able to block projects for "sustainability" reasons.

Protesters have targeted Siemens' offices in Germany in recent days over its role in a coal mining project led by Indian billionaire Gautam Adani. The mine is expected to produce 10 million tonnes of coal each year for export to India, increasing CO2 emissions that activists warn will exacerbate the climate crisis and fuel fires similar to those devastating parts of Australia.

On Saturday, teenage climate activist Greta Thunberg called for Siemens to make the "only right decision" and abandon its contract to provide signaling equipment for the railway that will transport coal from the mine to the Australian coast.

Siemens is one of the world's biggest engineering companies, employing 379,000 people in business operations all over the globe.

Kaeser wrote in his letter that he was concerned by the fires and expressed sympathy for people who have lost family members or their homes, but the chief executive said there was "practically no legally and economically responsible way to unwind the contract without neglecting fiduciary duties." That means he felt he couldn't ditch the Australian contract while fulfilling his obligation to protect the company from financial losses.

Instead, Siemens said it would establish a sustainability committee that has "the power to stop and escalate projects of critical nature to sustainability, no matter whether we are directly or indirectly participating."

"I will also open the doors to the youth, and the concerns young people have taken to the streets around the world, to sit at the table," wrote Kaeser.

A spokesperson for Siemens said the goal was to "prevent cases" like the Australian mine from happening again but he was unable to provide more specifics on when the committee would be formed, or how it would function.

Who is Joe Kaeser?

Siemens appears to have been caught off guard by the mine controversy, with Kaeser saying in his open letter that he had not been aware of the contract to provide signaling equipment.

It's a rare misstep for a CEO who has emerged in recent years as one of the few corporate leaders willing to speak out on political controversies.

Last year, the German executive said that President Donald Trump was becoming a symbol of intolerance following his attacks on four female members of Congress.

Siemens denounced xenophobia in a letter to its employees in the German state of Saxony in 2018 after anti-immigration protesters there were photographed giving the outlawed Nazi salute. Earlier in the year, Kaeser sharply criticized a right-wing German lawmaker, saying that nationalism would harm the country's prosperity.

Kaeser also took a public stand when he pulled out of Saudi Arabia's Future Investment Initiative following the murder of journalist Jamal Khashoggi at the Saudi consulate in Istanbul, Turkey.

"As soon as I heard of his death, it was clear to me that we couldn't simply move on and do business as usual," Kaeser said in October 2018.