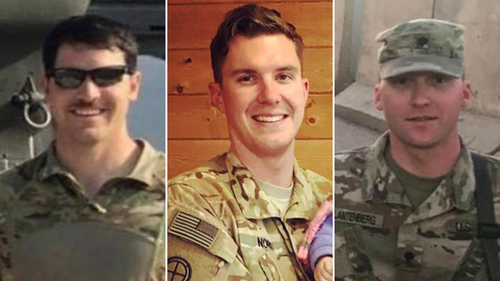 Three soldiers killed in a Black Hawk helicopter crash Thursday have been identified by the Minnesota National Guard.The soldiers, who had been assign...

Three soldiers killed in a Black Hawk helicopter crash Thursday have been identified by the Minnesota National Guard.

All three soldiers had returned from a nine-month deployment in the Middle East in May, a release from the Minnesota National Guard said.

"They paid the ultimate price in service to Minnesota and to the United States of America," said Walz, himself a National Guard veteran.

"The coming days will be dark and difficult. The state of Minnesota stands ready to assist the families of our fallen heroes."

The crew was conducting a maintenance test flight just after 2 p.m. when they lost contact with air traffic controllers, according to CNN affiliate WCCO.

A mayday call was put out and, about 90 minutes after it went missing, the UH-60 Black Hawk helicopter was found tangled in trees on a farm, WCCO reported.