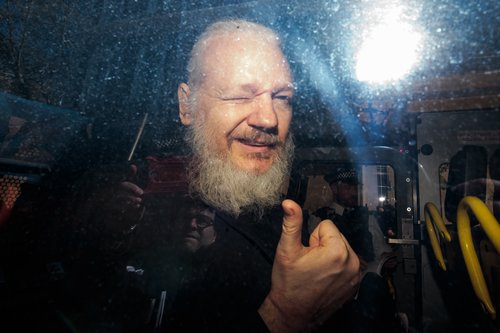 Swedish authorities are ending their investigation into an allegation of rape against WikiLeaks founder...

Swedish authorities are ending their investigation into an allegation of rape against WikiLeaks founder Julian Assange, the country's deputy chief prosecutor has announced.

Deputy director of public prosecution Eva-Marie Persson made the announcement at a news conference in Stockholm on Tuesday.

The investigation into Assange was reopened in May following his dramatic removal from Ecuador's embassy in central London the previous month. Swedish authorities had previously suspended the probe in 2017.

According to the Swedish prosecutor's office, a total of seven witness interviews were conducted as part of the investigation into Assange over the summer.

The Australian whistleblower originally faced four sex-related charges in Sweden after an August 2010 visit to the country. The claims of misconduct triggered a years-long extradition battle, which Assange eventually lost in the UK's Supreme Court in 2012. Shortly after that, Assange entered Ecuador's embassy, and remained there for almost seven years. In August 2015, the statute of limitations on three of the four allegations lapsed.

Assange is also currently fighting extradition to the United States, where he faces charges under the Espionage Act.

According to Persson, the reason behind her decision to discontinue the probe in Sweden was because 'the evidence has weakened considerably due to the long period of time that has elapsed since the events in question.'

'I would like to emphasize that the injured party has submitted a credible and reliable version of events. Her statements have been coherent, extensive and detailed; however, my overall assessment is that the evidential situation has been weakened to such an extent that that there is no longer any reason to continue the investigation,' Persson said.

Elisabeth Massi Fritz, a lawyer for the alleged victim in Sweden, said her client thought that Tuesday's decision was 'unjust.'

'My client has fought hard for many years and she has stood up for her rights even though it often felt like the whole world was against her. Today there are no words to describe how difficult this nine-year-long process has been for her,' Fritz said.

'My client feels that it's unjust that Assange will never have to face a proper interrogation where he would be asked the same questions that she has had to answer so many times. Assange had done everything in his power to avoid having to face justice, and now he has succeeded,' she added.

Assange -- who has repeatedly denied any wrongdoing -- has always maintained that he sought refuge over fears of onward extradition from Sweden to the United States for his work with WikiLeaks.

The 48-year-old is now being held at London's high-security Belmarsh prison where he is completing a sentence of nearly a year in UK jail for bail violations stemming from 2012, when he entered the Ecuadorian embassy.

While Assange's legal battle with Swedish authorities appears to have come to an end, he is still facing possible extradition to the United States.

In May, Assange was charged with 17 counts under the Espionage Act in the US for unlawfully encouraging, receiving and publishing national defense information in concert with former US Army intelligence analyst Chelsea Manning. He was initially charged in April with a single count of conspiracy to commit computer intrusion related to helping Manning obtain access to US Defense Department computers in 2010.

A full UK court hearing on whether Assange will be extradited to the US is set to take place in late February.

After the announcement in Sweden, WikiLeaks editor-in-chief Kristinn Hrafnsson tweeted, 'Let us now focus on the threat Mr. Assange has been warning about for years: the belligerent prosecution of the United States and the threat it poses to the First Amendment.'