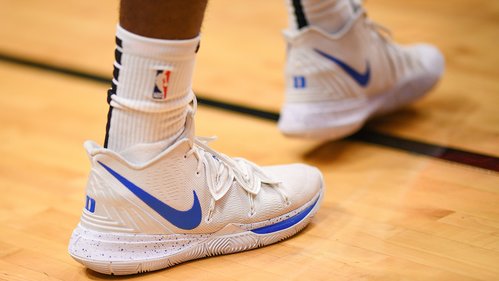 The NBA's recent controversy in China could have ripple e...

The NBA's recent controversy in China could have ripple effects for American footwear and apparel companies. Those companies, especially Nike, have close ties to the league and its athletes but rely heavily on China for growth.

Houston Rockets General Manager Daryl Morey set off a firestorm last Friday when he tweeted support for pro-democracy protesters in Hong Kong. After backlash from the NBA's Chinese partners, the NBA apologized to China and distanced itself from Morey's Tweet.

But later, many fans and US politicians from both sides of the aisle criticized the NBA for prioritizing profits over free speech and human rights, prompting NBA Commissioner Adam Silver to issue another statement saying he won't censor players or team owners on China.

The NBA has a lot to lose if it were to be shut out of China — one analyst estimates the country contributes 10% of the league's revenue. But its corporate partners, including Nike, are also counting on China to lift their bottom lines.

Nike brought in $6.2 billion in revenue from the Greater China region last year, up 21% from the prior year compared to just 7% growth in North America. China has been Nike's fastest growing market for the past two years. Rival footwear companies Adidas and Under Armour do not break out revenue from China, but sales in Asia Pacific have grown faster than in other areas for both of those companies.

For footwear companies, China boasts a growing middle class that is increasingly interested in their products. The country also offers close proximity to manufacturing facilities and a large and enthusiastic NBA fanbase. While the brands don't appear to be hurting from Morey's tweet, sales could take a hit if the controversy worsens. Footwear companies have already expressed concern about the ongoing US-China trade war eating away at their profits.

"Should this situation escalate, should the government suggest that consumers no longer buy Western brands or brands that are associated with the NBA, that would be very bad," said Matt Powell, a retail analyst with the NPD Group. "They are all getting a significant portion of their growth from China."

Involvement in an such an ideological clash is especially tricky for sports brands like the NBA and US footwear companies, which have taken progressive stands on many social issues — diversity, LGBTQ+ rights, women's equality.

Nike in particular could face challenges because of its role as the NBA's exclusive apparel provider. Already, the NBA's broadcast and streaming partners in China, CCTV 5 and Tencent Sports, said they will not air Houston Rockets games and may decline to show other preseason games, depriving the Swoosh of valuable exposure. The spat also caused the last-minute cancellation Wednesdsay of an NBA press event in China that was set to include several top NBA athletes, including Nike endorser LeBron James.

Its role as an apparel partner means Nike also could take a hit from a drop in official NBA apparel. As of Thursday, some Nike stores in China had pulled Houston Rockets sneakers and other merchandise from their shelves, according to a report from Reuters. Neither Nike nor the NBA immediately responded to requests for comment.

Nike has in recent years leaned on the NBA's popularity to help drive further growth in China. In 2017, to much fanfare, Nike opened the 6,550-square-foot "Nike and Jordan Basketball Experience Store" in Beijing, where consumers can test out basketball shoes on an in-store half court.

At the same time, the company also has established deep roots in China, which could help shield it from any serious NBA-related backlash, according to Susquehanna International Group analyst Sam Poser.

In addition to outfitting the NBA, Nike is the official apparel provider for the Chinese men's national basketball team. It also does much of its manufacturing in China, meaning if the Chinese government were to turn on the company, it could be undermining jobs for its own citizens.

Poser pointed out in a note to investors Thursday that Nike's philosophy in China has been to create products "of China, for China" rather than "strictly being a US brand looking to capitalize on the growth of the Chinese consumer. The philosophy has worked, as [Nike] has continued to thrive in China."

Adidas could also be hurt by the turmoil because Houston Rockets star James Harden is one of its top NBA endorsers. After Morey's tweet, Harden appeared keen to appease the team's Chinese fans, telling reporters, "we apologize, we love China."

Just last month, Adidas announced a new line of Harden basketball sneakers that are set to be available for purchase later this month. Adidas declined to comment for this story.

"Nike has a broader exposure here because of the uniform rights, but everybody has the potential to be affected by this," Powell said.