The GM strike is costing the company $90 million a day 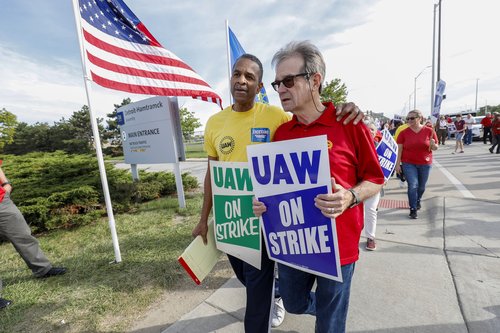 The United Auto Workers union strike at General Motors started its fourth week Monday. With no immediate end in sight, losses are mounting for both the autom...

The United Auto Workers union strike at General Motors started its fourth week Monday. With no immediate end in sight, losses are mounting for both the automaker, its workers, and the company's suppliers.

GM has lost $660 million so far since the start of the strike, according to Anderson Economic Group, a Michigan research firm specializing in the auto industry. But those losses are getting worse by the day.

'Daily losses started off slow at under $10 million per day,' said Patrick Anderson, the firm's CEO. 'However we're looking at GM losses spiraling up to $90 million daily as the strike continues into its fourth week.'

Losses are escalating as GM burns through the inventory of cars and trucks that it had available for sale. The continued idling of expensive plants and equipment is also hurting GM, particularly as non-UAW plants in Mexico, Canada and elsewhere in the US are also forced to halt operations because of the strike.

The two sides continued to talk Monday for the 22nd straight day since the strike began on September 16. The UAW's chief negotiator said Sunday that the talks had taken a 'turn for the worse' after management rejected the union's latest contract proposal. The company said it is committed to reaching a deal that 'benefits employees today and builds a stronger future for all of us.'

Without a settlement, the company's losses will probably top $1 billion by the end of this week. GM will not get that money back once the strike ends, making it that much more difficult to spend resources on the expensive research and development efforts to design and build new electric and self-driving vehicles that company executives say are a key to its future.

Credit rating agency Moody's had already warned that once the strike reached two weeks, the labor stoppage would probably have a material impact on GM's finances. With GM's credit rating just one step above junk bond status, a downgrade would cause it problems and raise its cost of borrowing going forward.

A GM spokesman said the company could not comment on the cost of the strike in advance of its earnings report later this month.

Nearly 50,000 UAW members are off the job during the strike, and they're getting only $250 a week in strike benefits rather than their normal pay of more than $30 an hour. Cumulative wage losses for those workers comes to about $15 million a day.

One of the strikers is Jessie Kelly, a single mom with a 6-year old son who had been prepared to move into her 'dream house,' before the strike started. Now she's staying with her mom, hoping the strike will end soon so that she can complete the purchase.

'It's devastating. It's very hard,' she told CNN. 'You just see your savings depleting, every single day a little bit more and more.'

And its not just the UAW members who are off the job. GM has about 10,000 US suppliers, many of which have been forced to cut back on their operations and jobs during the strike. Estimates are that hundreds of thousands of non-GM workers are off the job because of the work stoppage. Anderson estimates that lost wages for those workers came to about $18 million a day last week and will probably be up to about $25 million a day this week.

The layoffs are not limited to GM suppliers. Businesses in the communities with GM plants have been forced to cut back. John Grossi, owner of Amicci's Pizza, located near GM's Hamtramck assembly plant, limited his staff's hours because his sales are down about 25% during the strike.

'We don't like to give employees and drivers bad news that they can't work because we don't have enough business to support the paycheck,' he told CNN Business. 'I'm hopeful they'll find a solution to the problem before it becomes a bigger problem for us then it already is.'