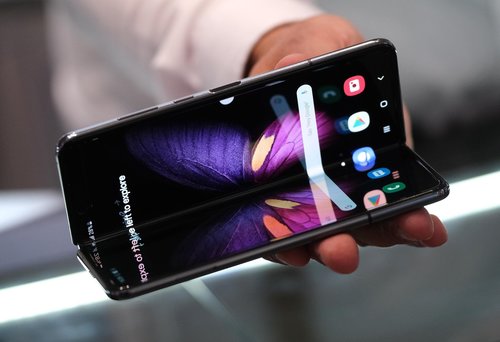 Samsung's Galaxy Fold will officially go on sale later this week in the United States after...

Samsung's Galaxy Fold will officially go on sale later this week in the United States after several months of delays.

The phone is launching on Friday at select locations of Best Buy, AT&T outlets and Samsung Experience Stores. It will come in two versions — unlocked or with an AT&T plan — and be available in two colors (black and silver).

The Galaxy Fold is a 4.6 inch-smartphone that opens up into a 7.3-inch tablet. The nearly $2,000 foldable phone was originally scheduled to launch last spring, but those plans were shelved after reports from reviewers about how easily the device broke.

Samsung tweaked the design in July by strengthening the phone's hinge area and extended the top protective layer to make it more obvious to users that it is not supposed to be removed. The company also added caps to protect the top and bottom of the phone's hinge.

Noticeably absent from the launch is T-Mobile, which initially offered pre-orders in April but had to give buyers' refunds after Samsung scrapped the launch. AT&T, which owns CNN parent company WarnerMedia, also canceled preorders and offered customers a $100 gift card for the inconvenience.

The Fold will run on Android 9. Samsung said it worked with Google and Android developers to "optimize hundreds of apps for the device."