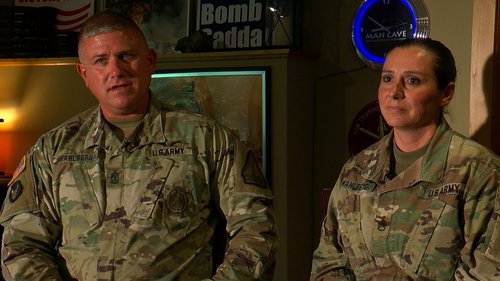 Hundreds of Minnesota families are cherishing these last few days before their loved ones head overseas to serve our country.

MINNEAPOLIS (WCCO) -- Hundreds of Minnesota families are cherishing these last few days before their loved ones head overseas to serve our country.

Nearly 700 soldiers from the Minnesota National Guard’s 34th Expeditionary Combat Aviation Brigade will be deploying to Kuwait in the coming weeks. It comes as tensions rise across the Middle East after an oil refinery in Saudi Arabia was bombed on Sunday. The country’s leaders blame it on Iran as United States officials ponder how to defend its ally in Saudi Arabia.

If anyone holds rank in the Walhberg family kitchen, it’s Staff Sgt. Kaelyn, also known around here as Mom. She questioned her two cooks — them being her husband 1st Sgt. Jeremy Wahlberg and their son, London.

“They’re not gonna learn [to cook] unless they actually do it,” Kaelyn said.

A member of the National Guard for 16 years, Staff Sgt. Wahlberg will soon be deployed overseas for the first time doing human resources work.

If the family is feeling any stress, it’s because their rock will be gone for roughly a year.

“She takes a lot of responsibilities on herself and a lot of things around the house and with the family in general as far as keeping things working well,” Jeremy said. “It makes me appreciate her a lot more, some of the things I see that she has to deal with.”

What they’re not trying to focus is the conflict in Saudi Arabia where an oil refinery was bombed. Staff Sgt. Wahlberg will be stationed in Kuwait. Her husband served in Iraq during the Iraq War 12 years ago. He said even though his wife will be serving in the same region as he did, the difference in the environment compared to back in 2007 is a night and day difference.

“I try not to let it worry us or think about it. You know, I never look at it in that context. I just look at it as what’s going on today in the news and we try not to let any of that stuff get to us,” Jeremy said.

The dangers of service are not lost on them.

“I take it all in stride, and this stuff could happen anywhere,” Kaelyn said. “They talk about the front lines, but the front lines are basically anywhere. It could be in your town, country. I’m not concerned. Whatever happens, happens for a reason.”

It’s just part of the path they’re both proud to walk as dedicated members of the military.

“For us, it’s just become not really a job but more just a way of life and just how, just what we are,” Jeremy said.

A family that’s doing its best to enjoy a few more tips to the lake, vacations abroad and dinners together at home.

“We hope that the people above us make the best decisions possible and we do the right thing and it allows us to sleep at night,” Jeremy said.

Staff Sgt. Wahlberg’s unit will soon head to Fort Hood in Texas for a few months of training. They’ll arrive in the Middle East in December.