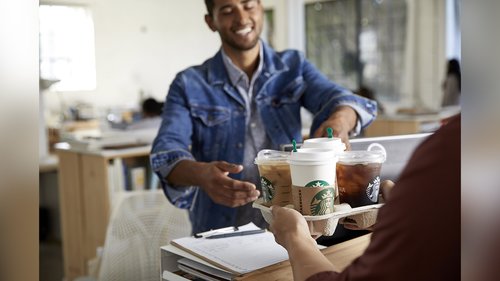 Starbucks is planning to improve mental health benefits for US employees in one of its latest bids to attract and retain talent in a tight labor market.

In a letter to employees Thursday, CEO Kevin Johnson announced the initiative along with others designed to improve employee productivity and engagement. The announcement came as Starbucks hosted a massive leadership conference in Chicago, at which 12,000 store managers participated.

Although Starbucks did not announce any specific new benefits, it hopes to encourage more employees to take advantage of the company's mental health care package. And the company will engage employees to help tailor a new suite of benefits to their needs.

Keeping partners — Starbucks' term for employees — well and happy is critical to the company's business. To execute its ambitious expansion plan, the coffee company needs to hire rapidly. That has been challenging for the entire retail and food service industries, as the US unemployment rate remains at an historic low. Competition for workers is fierce.

One way to attract talent is by offering robust benefits and unique services.

"The more thoughtful we are about creating a range of benefits that matter to our partners — that helps us attract new partners," Johnson told CNN Business. "Over this past year, one of the things that partners have highlighted is the need for increased focus on mental health."

Mental health services are not new for Starbucks. Through its health insurance, Starbucks offers inpatient and outpatient mental health care, as well as six free visits with a mental health provider through its Employee Assistance Program

The offerings are "very comprehensive," according to John Kelly, senior vice president of global public affairs and social impact for Starbucks. But, he noted, just 4% to 5% of employees actually use it.

To raise that participation rate, Starbucks will spend the next several months working with employees to figure out a better plan, Kelly said.

He suspects Starbucks employees aren't taking full advantage of what is currently being offered because they may want something different or more tailored to their needs, such as the ability to text therapists instead of calling or setting up an appoint.

With its new efforts, Starbucks is also hoping to "break the stigma," said Kelly, "and really normalize that your mental health is just as important as your physical health."

During the Chicago conference, Starbucks is running a "mental health matters" session with a clinical psychologist. The training is designed to help educate managers about the range of mental health problems, identify signs that someone may be struggling and offer tips on how to approach them in the right way. Starbucks will continue to offer similar training to managers moving forward, Kelly said.

The increase was a sector-leading move, according to Paula Allen, vice president, of research, analytics and innovation for the Toronto-based human resources company Morneau Shepell, noting that the average plan is about $500 a year.

"That investment was quite well received," she said, adding that in Canada, other companies followed Starbucks' lead.

The changes the company has made in Canada could help guide what happens in the United States, said Kelly.

Starbucks has launched a number of employee benefits and programs to keep and attract workers. In 2014, the company introduced the Starbucks College Achievement Program, which gives employees a full, free ride to Arizona State University. The company offers stock options to workers, and last year started testing a program that allow some employees to spend half of their workweek at a local nonprofit.

Events like the ones held in Chicago can make store managers feel good about their jobs. At the Chicago event Wednesday, employees were welcomed by cheering, pom-pom waving greeters. They listened to high-profile speakers and learned more about the company and its philanthropic efforts.

"In a lot of ways, the most important role in the company is the store manager," Johnson said. Managers are responsible for hiring and taking care of staff, and for ensuring that Starbucks locations maintain the atmosphere of a "third place" after home and work, he said.

And Starbucks has to do more than just hold on to employees. In the 12 months ended in July, the company opened 641 net new stores in the Americas. To manage and staff those new locations, Starbucks needs to be able to hire aggressively.

It's not alone in seeking ways to bring on new talent. Taco Bell has thrown hiring parties and McDonald's targeted a new, older demographic by partnering with AARP. Chipotle CEO Brian Niccol has called 2019 "the year of the general manager."

By focusing on mental health, Starbucks is highlighting yet another type of benefit.

Improving mental health among employees is also just good business. Many companies are trying to figure out creative ways to help their workers.

"This is an area that, as HR professionals, we weren't talking about quite as much until recent years," said Tracie Sponenberg, chief people officer for The Granite Group and a panelist on the Society for Human Resource Managment's HR Disciplines Special Expertise Panel.

If employees don't get the support they need, there could be "significant" costs to employers, Allen said. Employees suffering from mental health issues are less productive. And in the service industry, where employees may deal with particularly stressful situations, mental health support is especially important, she added.