500 rounds of ammunition delivered to wrong address in Las Vegas, lost for hours 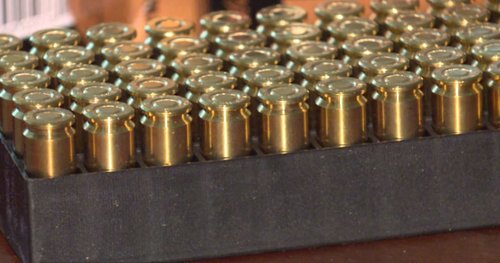 It was a moment of panic for one Las Vegas man after he said the 500 rounds of ammunition he ordered online was delivered to the wrong address.

LAS VEGAS (KTNV) -- It was a moment of panic for one Las Vegas man after he said the 500 rounds of ammunition he ordered online was delivered to the wrong address.

"Some friends of mine and I had planned a day of shooting up at the North Decatur shooting range,” said Cipollino. “And with a bunch of people shooting you can easily go through four or 500 rounds of ammunition within an hour or two."

But for several hours Wednesday he had no idea where the 500 rounds of live ammunition were.

“I was very concerned that 500 rounds of ammunition would get in the hands of someone who was not supposed to have it,” he said.

He bought it online, submitting a valid driver's license as required. They were shipped via FedEx.

"I received an email on my phone while I was studying for my final that the ammunition had been dropped off at my door. So, I immediately got up and went to my door and nothing was there,” he said.

He worried that it could have been delivered to a home with kids, a felon or someone with bad intentions.

"With the recent terrible situation that happened October 1st it concerns me,” said Cipollino.

And the same day he was trying track down his package, a College of Southern Nevada student was arrested for having 2,000 rounds of ammunition and a rifle in a parked vehicle at the Henderson campus.

Cippolino called FedEx several times. Finally, he said a dispatcher told him they had no way of contacting the driver who was shown to have the delivered the ammo.

"I found that very questionable because in our age of technology how could you not get ahold of someone? Especially a delivery driver,” he said.

After five stressful hours he said the driver showed up at his door.

“He said I apologize it’s my fault. I delivered it to the wrong address,” Cipollino said. "Fortunately, it was delivered to my neighbor."

13 Action News reached out to FedEx to ask about their policy when it comes to delivering sensitive items like ammunition but so far, they have not responded to our request.

"I will never do that again,” he said. “For the extra 10 or 15 dollars it will cost me, I will go to the Sportsman’s Warehouse. Buy it. Secure it. Drive it home and secure it again."

Stage 5 to reopening Indiana: Too soon or not soon enough?

OSHP: Semi driver crashes into pond off US 30 after falling asleep