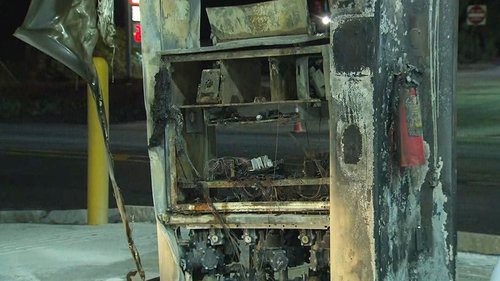 DANVERS, MA (WBZ) -- Danvers Police said they’ve found the pickup truck involved in a hit-and-run crash that caused a gas pump to explode into flames overnight. But, they’re still looking for the driver.

The crash happened around 1:20 a.m. Friday at the Gulf station on Route 1 near the Topsfield line.

The clerk told reporters a white pickup truck slammed into a gasoline pump and then sped away. The truck, a 2017 white Chevrolet Silverado with out-of-state plates, was found hours later in Topsfield, police said.

The clerk, Madhu Sudan Rana, said he heard a loud bang and saw a burst of light when the crash happened. Flames and thick black smoke broke out, but the gas station’s suppression system was triggered, setting an alarm. It put out most of the fire before firefighters arrived.

He was able to turn off the gasoline pumps and run next door. No one was hurt.

“I saw the car, and he was driving the wrong way, also,” Rana said.

Alice Santisi, who also works at the station, showed up to see the damage for herself Friday.

“Oh, my goodness, I was scared to death; just happy to hear nobody got hurt,” she said.

The suppression system at the Mobil station across the street was also set off by the fire. Both gas stations are now closed until further notice.

Man hospitalized after leading police on chase, shooting in Muncie