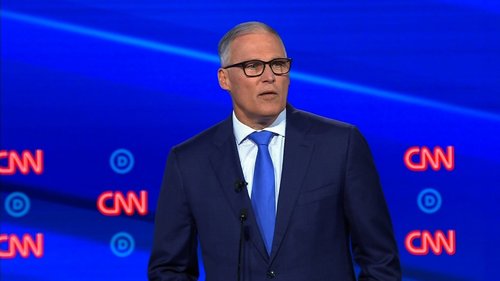 "It's become clear I'm not going to be carrying the ball -- I'm not going to be president, so I'm withdrawing tonight from the race," Inslee told MSNBC's Rachel Maddow. "But I have to tell you, look, I've been fighting climate change for 25 years, and I've never been so confident of the ability of America now to reach critical mass to move the ball."

The Washingtonian made combating climate change the fundamental issue motivating his campaign, routinely telling reporters that the climate crisis affects "every issue" facing the country. With that in mind, he released a series of plans that tied the issue to everything from foreign policy to the economy to labor laws.

Though Inslee failed to gain traction in the race to take on President Donald Trump, he plans to seek a third term as Washington governor, a source familiar with his thinking told CNN.

Inslee plans to announce his reelection campaign on Thursday in an email to supporters, the source said.

While Inslee did recently reach the donor threshold to qualify for the third Democratic national debate, he had yet to reach the polling threshold and was therefore unlikely to qualify.

In an email to supporters outlining his exit Wednesday, he touted the increase in climate-based policy proposals from other Democratic candidates as rooted in his campaign's "gold standard."

"Many of the campaigns started with little attention to climate, but since our campaign began, we've seen almost every serious candidate put out a climate plan; we've seen climate come up in both debates; and we now have two networks hosting nationally-televised climate forums in September," he said. "Most importantly, we have introduced a detailed and comprehensive policy blueprint for bold climate action and transformation to a clean energy economy. We will fight to ensure this gold standard of climate action is adopted and executed by our party and our next president."

Assessing the other Democratic candidates Wednesday night, Inslee said that "every single one of them is 100% better than the current occupant, no question about that."

"I'm not endorsing a candidate tonight. I think a number of them have intriguing ideas, but we need all of them to raise their game," he added.

Inslee was on the trail until the final days of his campaign. The governor released his sixth climate change policy proposal on Wednesday, a plan that tied combating the issue to agricultural policy.

Inslee was scheduled to be in New Hampshire on Thursday for a presidential candidate forum at the New Hampshire Institute of Politics.

Inslee did qualify for the first two Democratic debates, turning in performances in which he looked to steer the conversation towards combating climate change as often as possible. Inslee also publicly called for the Democratic National Committee to host a debate entirely focused on climate change, knocking the committee for rebuffing his demands.

"Climate change is not a singular issue, it is all the issues that we Democrats care about," he said at the second set of Democratic debates. "It is health. It is national security. It is our economy."

The governor will now return to Washington state, where he is in his second term. Inslee won reelection in 2016 by nearly 10 percentage points and is eligible to run for reelection in 2020.

While Inslee made climate change a singular focus, he was not alone in talking about the issue on the campaign trail.

Democratic candidates are often asked about the climate crisis, a signal that the issue is top of mind for active Democratic voters. And a CNN poll earlier this year found that 82% of Democrats or Democratic-leaning independents find climate change a "very important" issue, ranking it at the top of the list ahead of universal health care, tighter gun laws and impeaching Trump.

"We've done something else, I think: We've given people hope," Inslee said Wednesday. "The grassroots has responded to this message."

"I don't think there's any question that we have had success moving the needle," he said. "And so I think this is a positive experience."