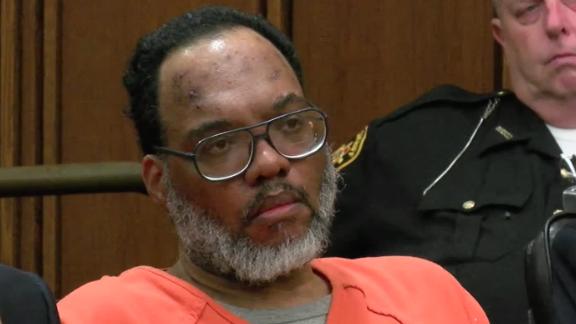 Former Ohio trial court judge and politician Lance Mason pleaded guilty to murder in the 2018 death of his ex-wife.

A former Ohio trial court judge and politician pleaded guilty Tuesday to murder in the 2018 death of his ex-wife.

'I wish to take responsibility for the crimes I committed,' Mason said Tuesday in court in northeastern Ohio's Cuyahoga County. 'I don't wish to prolong it or delay it, or hurt my family or Aisha's family, any more than I have,' Mason said.

A plea agreement with prosecutors calls for Mason to be sentenced to life in prison for the aggravated murder charge, Judge John Haas said. But the judge will decide at sentencing whether Mason will be eligible for parole after serving at least 20, 25, or 30 years.

Authorities said Mason fatally stabbed Fraser as she arrived at a Shaker Heights home with the couple's 8-year-old and 11-year-old children. He then stole her vehicle and drove into a police officer's vehicle, injuring the officer, police said.

Mason had served prison time for attacking Fraser in 2014.

Mason was a sitting judge on Cuyahoga County's Court of Common Pleas when he was charged with the 2014 attack.

Before he was on the bench, he was an Ohio state senator from January 2007 to September 2008, and previously was a state representative, where he served as ranking minority member of the House Criminal Justice Committee for five years.

He also was an assistant county prosecutor for three years in the 1990s.