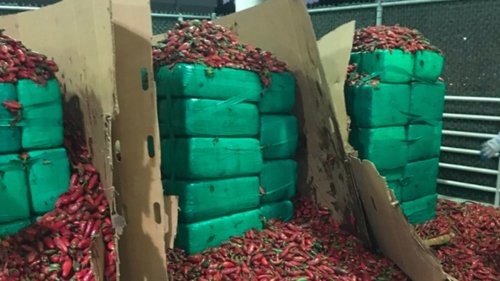 Border Patrol officers in the South Bay made a spicy discovery in a shipment of peppers this week.

Otay Mesa, CA (KGTV) -- Border Patrol officers in the South Bay made a spicy discovery in a shipment of peppers this week.

Customs and Border Protection officers stopped a 37-year-old Mexican national entering through the Otay Mesa Port of Entry in a tractor pulling a trailer of cargo. The cargo listed jalapeño peppers on the manifest.

Upon secondary inspection, a canine team alerted agents to the shipment.

The narcotics are valued at $2.3 million.

“I am proud of the officers for seizing this significant marijuana load,” said Otay Mesa Port Director, Rosa Hernandez. “Not only did they prevent the drugs from reaching our community, they also prevented millions of dollars of potential profit from making it into the hands of a transnational criminal organization.”

The seizure followed another massive bust on Aug. 13, in which officers discovered 10,642 pounds of marijuana concealed in a shipment of plastic auto parts at the same cargo facility.