Recession signs are flashing, but Americans are still shopping at Walmart 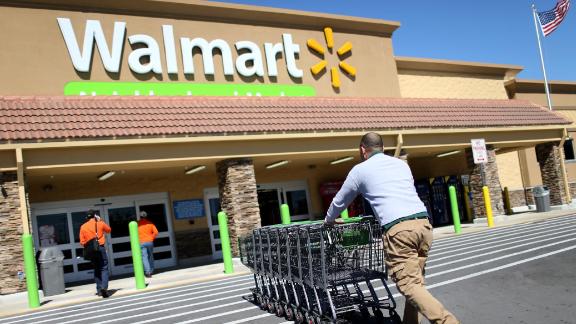 Walmart (WMT), a Dow stock and bellwether of consumer spending, said that sales at its jumbo-size US stores increased 2.8% during its most recent quarter compared to the same period a year ago. Walmart also raised its guidance for the remainder of the year, signaling optimism about the strength of its business. CNN's Clare Sebastian reports.

Fresh off Wall Street's worst day of the year, Walmart calmed investors worried the US economy could fall into a recession.

Walmart, a Dow stock and bellwether of consumer spending, said Thursday sales at its jumbo-size US stores increased 2.8% during its most recent quarter compared with the same period a year ago. Walmart raised its guidance for the remainder of the year, signaling optimism about the strength of its business.

Shares of Walmart rose about 5% in early trading Thursday.

Walmart has strengthened its hold on shoppers in stores and grown online sales in recent years as many rival retailers struggle to adapt to shopping changes. Walmart and big box retailers are gaining market share against slumping competitors like Macy's and JCPenney, which reported earnings below Wall Street's forecasts this week.

Walmart has focused its investments on offering its low-and-middle income shopping base cheaper and more convenient ways to buy groceries, the bulk of its business. It has also poured money into sprucing up stores and raising wages for workers.

At the same time, it has redesigned its website and bought several high-end brands — including Bonobos and Modcloth — to draw wealthier shoppers. To compete against Amazon, Walmart has expanded curbside grocery pickup from stores and introduced one-day shipping to 75% of US customers.

Tariffs on goods from China are hitting retailers hard. But Walmart has less exposure than some of its rivals because two-thirds of its merchandise comes from the United States.

The United States currently imposes tariffs on $250 billion of US goods and Trump has threatened to put tariffs on the remaining Chinese imports before the end of the year. Consumers could be hit the hardest by that next round, which would tax smartphones, laptops, shoes and toys.

The Trump administration delayed those tariffs until December 15. Trump said the move was designed in part to avoid any pain for consumers heading into the holiday season.