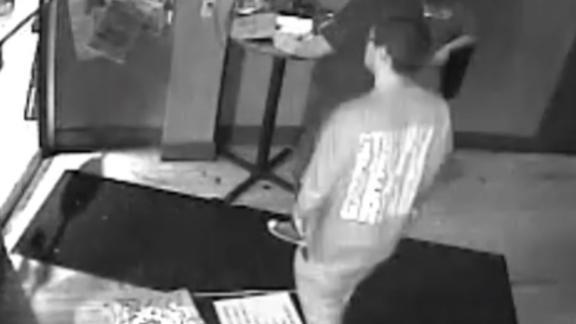 The man who opened fire at a bustling neighborhood in Dayton, Ohio, last weekend left his sister and companion in a bar and went to another nightspot by himself minutes before he got his gun and began shooting, police said Tuesday.

Authorities on Tuesday provided a detailed timeline of the shooting in which 24-year-old Connor Betts used a souped-up assault rifle to fire 41 shots in about 30 seconds, killing his sister and eight others.

Dayton Police Chief Richard Biehl clarified that 17 people were injured by gunfire, three more than a previous count, and more than two dozen were injured overall, including people hurt in the stampede.

According to the timeline, Betts, his sister, Megan Betts, and a friend arrived together to the Oregon District of Dayton at 11:04 p.m. Saturday and went to a bar named Blind Bob's.

Betts split off from the two and went to another bar called Ned Peppers at 12:14 a.m., and after 30 minutes he went back to the vehicle in a parking lot to gather the weapon and change clothes, Biehl said.

With a weapon in his backpack, Betts walked toward an alley and began firing into Blind Bob's at 1:04 a.m., authorities said. Based on a timeline pieced together from security cameras, police engaged with him after less than 20 seconds and Betts was killed 32 seconds after his first shot.

Police said there was a 'strong possibility' that Betts visited Ned Peppers by himself to case the place, but Biehl cautioned that he knew the area well and had been there the night before, too.

'This was a plan well before he got to the Oregon District (that night),' Biehl said.

Betts knew that his sister and friend were still in the area when he opened fire because they had been texting and talked in a phone call, Biehl said. Still, he said police are divided on whether he intentionally sought out and killed his sister and injured the friend.

Authorities said they do not know his immediate motivation -- why this location at this time and these victims -- but Biehl said police knew his broader violent mindset.

Police have said he had an obsession with violence and had expressed a desire to commit a mass shooting. Comments from police, memories from former classmates and posts on his apparent Twitter account show he had a deep interest in violence -- as well as the easy access to high-powered guns that is the common thread of all American mass shooters.

On Friday, the gunman's friend, Ethan Kollie, was arrested on federal firearms charges for allegedly possessing a firearm while using or addicted to a controlled substance and falsely filling out a firearms application form. Authorities also accused Kollie of providing Betts with the body armor and a 100-round double-drum magazine used in the Dayton attack.

In an interview with federal agents, Kollie said he had done hard drugs, marijuana and LSD with Betts several times a week between 2014 and 2015, the affidavit says. Still, prosecutors emphasized that Kollie did not intentionally help plan the shootings.

'He does not deny his friendship with Connor Betts and he was as shocked and surprised as everyone else that Mr. Betts committed the violent and senseless massacre in the Oregon District,' Nick Gounaris, the attorney, said.