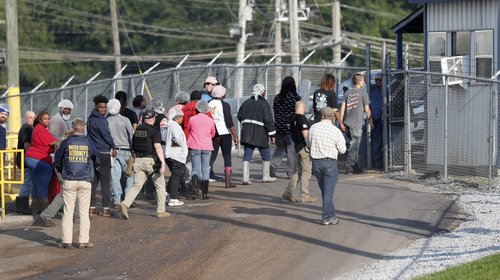 One of the companies targeted in last week's immigration...

One of the companies targeted in last week's immigration raids in Mississippi is holding a job fair Monday about 11 miles from one of its plants that was raided.

Koch Foods, a poultry processor, says the fair will be held at a job center in Forest beginning at 9 a.m. (10 a.m. ET). Job applicants will need two forms of identification, the company says.

On Wednesday, US immigration authorities raided the Koch Foods plant in Morton, about 11 miles west of Forest, and six other Mississippi food processing plants. They rounded up 680 immigrants in what a federal prosecutor said was 'believed to be the largest single-state immigration enforcement operation in our nation's history.'

The fair is part of an effort to secure workers for the Morton plant, Bell said.

Koch Foods wasn't sure how many of its employees were arrested in the operation because authorities also seized all of its employment records, it said in a statement. No managers or supervisors were believed to be among those arrested, the company said.

A federal search and seizure warrant indicates that, in addition to arresting undocumented immigrants, authorities were permitted to seize a wide range of documents, including labor and employment records, business records, identification documents, correspondence between Koch and government entities, and any safes, file cabinets or computer hardware investigators might deem useful.

The Morton plant employs about 1,000 people, the company said, and though the raids disrupted Wednesday's first shift, operations returned to normal later that day.

While Koch Foods is cooperating with investigators, it said, it had no part in or advanced knowledge of the raids.

Following news of the raids, strangers and neighbors in Forest volunteered to take children with nowhere to go, CNN affiliate WJTV reported.

People also packed a parking lot near one of the two raided plants in Morton and waited for news on their loved ones. Brittany Reynoso said she came to the parking lot in case members of her church had been caught up in the raid. She wanted them to see a familiar face if they were released from custody.

'It's definitely a ghost town. It is so empty. I've never seen Morton or Forest or any of the surrounding areas look so empty during the day,' she said. 'It is horrible. And I honestly don't think these communities will make it without them because they really and truly are the backbone of what's keeping this town afloat.'