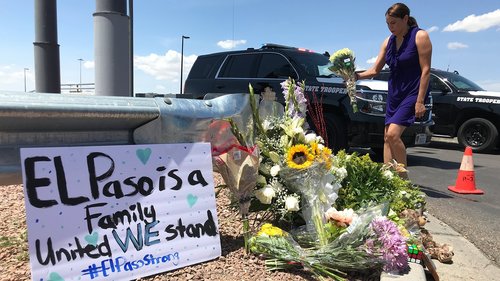 A new federal law specifically making mass shootings a capital crime is among the proposals being studied...

A new federal law specifically making mass shootings a capital crime is among the proposals being studied as Justice Department officials seek to follow President Donald Trump's order to come up with legislative fixes to tackle the spate of active shooting incidents.

Attorney General William Barr spent the weekend discussing possible legislation with the President and vice president and with other Justice and FBI officials, a source briefed on the matter said. One of the top options for legislative proposals would make mass shooters eligible for the death penalty in the same way federal law treats people who use explosives, a law enforcement official said.

Any changes would have to be passed by Congress.

Existing federal law specifies the use of weapons of mass destruction as a crime that carries the possible death penalty. But if the same suspect uses a gun instead of explosives, there's no specific federal law to address that. Instead, federal prosecutors often turn to other laws, including one addressing hate crimes, to bring charges in mass shooting incidents. Federal prosecutors also can seek charges for gun offenses or crimes against federal officials.

One complication for any new law is how to define mass shootings, in a country where there are routinely dozens of people shot in drug-related and other crimes over the course of a weekend in certain cities.

The FBI generally refers to mass shootings as active shooter incidents. The bureau has previously defined a mass murder incident as one in which four people or more are killed in one location. In previous legislation, Congress has defined it as having a toll of three or more.

Another idea under serious consideration is a so-called federal red flag law, which would allow law enforcement or family members to seek a court order to temporarily seize firearms from someone who may be a danger to themselves or others. South Carolina Republican Sen. Lindsey Graham said on Twitter over the weekend that such a federal law could help prevent mass shootings. Graham and Democratic Connecticut Sen. Richard Blumenthal have proposed red flag legislation.

Justice officials are focused on addressing gaps in federal law and are seeking to bolster the use of the death penalty in response to mass murders and hate crimes.

While federal law addresses crimes involving international terrorist groups, there's no specific domestic terrorism law. Instead, the FBI investigates certain crimes as domestic terrorist incidents and prosecutors can use such evidence to ask for harsher penalties.

For years, Justice Department officials in previous administrations have studied the idea of a passing a domestic terrorism law, but those efforts have failed in part because of concerns about violating First Amendment rights. There's existing legal process under US law to designate foreign terrorist groups, but none for domestic groups.

A revival that effort is unlikely under the current administration, officials say.