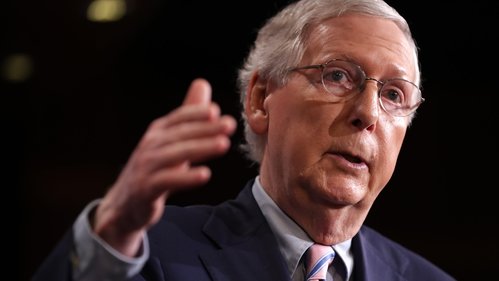 The Senate passed Thursday a massive budget deal that would stave off the looming threat of a potential default on US debt and prevent automatic spending cut...

The Senate passed Thursday a massive budget deal that would stave off the looming threat of a potential default on US debt and prevent automatic spending cuts to domestic and military funding.

The a final vote was 67-28 and the bill will now go to President Donald Trump for his signature.

The vote followed days of grumbling from GOP senators about the cost of the package and uncertainty surrounding who will support it.

The agreement, negotiated between congressional leaders and the Trump administration, represents a significant bipartisan compromise but the vote in the GOP-led Senate has proven slightly tougher than some expected among Republicans.

In floor remarks ahead of the vote, Senate Majority Leader Mitch McConnell called the proposal 'a strong deal.'

'In recent weeks, key officials on President Trump's team engaged in extensive negotiations with Speaker Pelosi and the Democratic House,' the Kentucky Republican said. 'Given the exigencies of divided government, we knew that any bipartisan agreement on funding levels would not appear perfect to either side. But the administration negotiated a strong deal.'

On Wednesday, McConnell wouldn't directly answer if more than half his caucus would vote for the bill, only replying to CNN: 'It's going to pass.'

The vote is a hard one for conservatives in the Senate, but Trump, Vice President Mike Pence and Secretary of Defense Mark Esper have all made their wishes known and they've been making calls, but this is a hard vote if you campaigned on slashing spending.

Trump encouraged senators to back it in a tweet Thursday morning, telling GOP members in the chamber to 'Go for it.'

'Budget Deal is phenomenal for our Great Military, our Vets, and Jobs, Jobs, Jobs!' he tweeted. 'Two year deal gets us past the Election. Go for it Republicans, there is always plenty of time to CUT!'

it's up to Trump to sign it, but assuming that happens, the deal doesn't stop the government from shutting down at the end of September, but it does set the top line budget numbers for two years, end sequestration and raises the debt ceiling for two years. That's a lot, but there is still work for appropriators to decide how to spend the money that was just allocated. That is already underway and will continue throughout the August recess.

In simple terms, Congress will have just decided how much their household budget will be for the next two years, they still have to decide how much of that money goes to groceries, vacations and kids' back to school supplies. And, there is always plenty more to fight about when you get into those details.

Still, many conservative Republicans worry the package is just too expensive.

'At the end of the day, there's tremendous amounts of new spending, way over and above what we need to secure our national defense,' said freshman Sen. Josh Hawley, a Republican from Missouri, on Wednesday. 'I think it's irresponsible and not for any clear purpose beyond the defense portion, which I support.'

Sen. Cory Gardner, a Republican from Colorado up for reelection next year, said Wednesday he is concerned 'it's just a lot of money and at some point, things become so free, we can't afford it.'

One GOP senator on the fence acknowledged that some of his colleagues would like to vote against it to publicly demonstrate they are fiscally prudent while privately hoping it passes so there can be orderly governing out of Washington.

'There are a lot of people who will vote 'no' who hope to heck it passes,' said the senator, who did not want to be identified.

This story has been updated with additional developments Thursday.