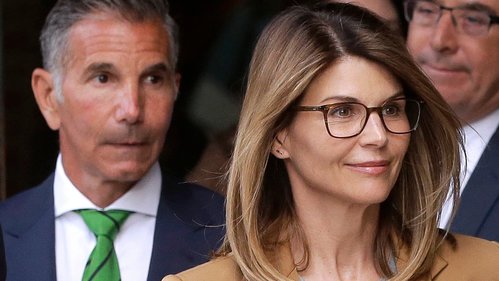 Lori Loughlin's daughter Bella Giannulli broke her social media silence to wish her mother a happy birthday.Loughlin turned 55 on Sunday and has been...

Loughlin turned 55 on Sunday and has been keeping a low profile ever since she and her fashion designer husband Mossimo Giannulli were among dozens of wealthy parents charged in a college admissions cheating scheme.

Prosecutors allege that the couple paid $500,000 to a fake charity to get their two daughters, Isabella, 20 and Olivia Jade, 19, into the University of Southern California by falsely designating them as crew team recruits.

On Sunday their daughter Isabella posted a black and white photo with her mother on her official Instagram account.

'Happy birthday mama,' the caption read. 'I love you.'

Her sister Olivia Jade, a social media influencer who along with her mother lost partnerships with some major companies when the scandal broke, wrote in the comments on the picture 'My people' with a heart emoji.

Olivia Jade also posted about her mother's birthday, sharing a picture on Monday of Loughlin holding her youngest daughter when she was a baby.

'One day late,' the caption read. 'Happy birthday. i love you so much.'

Loughlin was written out of the Hallmark Channel series 'When Calls the Heart,' but that didn't stop some of her former co-stars from remembering her on her special day.

Erin Krakow also posted a black and white photo of her and Loughlin.

'Happy Birthday to my forever friend with a heart of gold,' Krakow wrote. 'Love you!'