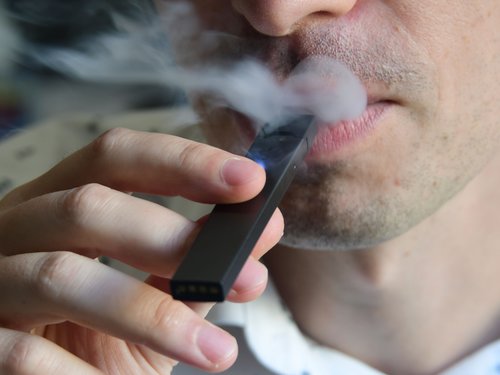 A Juul representative repeatedly told a ninth-grade classroom that the company's e-cigarette was "totally safe" before showing underage students the device,...

A Juul representative repeatedly told a ninth-grade classroom that the company's e-cigarette was 'totally safe' before showing underage students the device, according to two teenagers who testified under oath to Congress on Wednesday.

The comments came at the first of two hearings organized by the House Oversight Subcommittee on Economic and Consumer Policy to 'examine [Juul's] responsibility for the youth nicotine addiction epidemic.' Company executives, including Juul's co-founder, will testify on Thursday.

One of the teens who testified on Wednesday, 17-year-old Caleb Mintz, said a Juul representative spoke to his class as part a 'mental health [and] addiction seminar' where teachers were asked to leave the room.

The representative mentioned his connection to Juul, Mintz said, and the comments on e-cigarette safety were met with a 'sigh of relief' among his classmates who were already vaping.

In a statement, Juul said the presentation was part of a 'short-lived Education and Youth Prevention Program which was ended in September 2018 after its purpose -- to educate youth on the dangers of nicotine addiction -- was clearly misconstrued.'

But experts say that Juul itself contributed to epidemic-levels of vaping among teens, in part by raising nicotine levels and triggering an 'arms race' of the addictive chemical.

'I believe the presenter was sending mixed messages by saying Juul was 'totally safe' and following up every totally safe statement with 'but we don't want you as customers,' ' said Mintz. 'I believe that the presenter was playing on the rebellious side of teens,' he added, 'where when teens are told not to do something, they are more likely to do it.'

Mintz's friend, 16-year-old Phillip Fuhrman, testified that he was addicted to Juul at the time of the incident, which occurred in April 2018. The two boys spoke with the Juul representative after the presentation concluded, they said, and Mintz asked what he should do if he had a friend addicted to nicotine.

Democratic Rep. Raja Krishnamoorthi, chairman of the House Oversight Subcommittee, asked Fuhrman, 'When Caleb [Mintz] asked the presenter what he should do if he had a friend that was addicted to nicotine, was Caleb referring to you?'

'He was,' Fuhrman testified. 'Since Caleb was not specific on what kind of nicotine he was addicted to, whether it was an e-cigarette or cigarettes, the speaker thought that he was talking about cigarettes, and he said that he should mention Juul to his friend.'

The product was 'a safer alternative than smoking cigarettes and it would be better for the kid to use that,' the Juul representative allegedly said, according to Fuhrman. 'He didn't use it but he did take it out and show it to us,' Fuhrman added.

Krishnamoorthi sighed before calling the company's actions 'very disturbing behavior, to say the least.' He summarized the testimony, saying 'a person connected to Juul pulled out a Juul device to demonstrate its safety to teenagers and then lied about the product being quote-unquote totally safe.'

The Juul representative also 'mentioned that the FDA was about to come out and say that Juul was 99% safer than cigarettes, and he said that that would happen very soon, and that it was in FDA approval while the talk was going on,' according to Fuhrman.

In the year since the incident, Juul has not received FDA approval as a smoking cessation device.

'Under the guise of education'

Phillip's mother, Dorian Fuhrman, testified that after her son started to vape, he 'changed kind of overnight. He started spending a lot of time in his room in the dark. He became moody. We had a very contentious relationship.'

She worked with Mintz's mother, Meredith Berkman, to start a group called Parents Against Vaping E-cigarettes after the classroom incident.

She said she believes the outside group 'was naive, definitely, but in good faith.' Berkman said she called the group and a staffer answered the phone. Berkman testified that the staffer, when asked about the presentation, said she had been researching anti-Juul education and came across the name of Juul employee listed online as the company's youth prevention coordinator.

When reached by the staffer, the Juul employee said she had 'the perfect person' and sent the Juul representative into the school, according to Berkman.

Later in Wednesday's hearing, Rep. Rashida Tlaib, a Democrat, told Berkman that 'as a mother, I can sense your frustration. ... I just want you to know you have the truth on your side. And just be stronger for that.'

Democratic Rep. Ayanna Pressley later echoed those comments, telling Berkman that 'we thank you for your fierceness and your advocacy.'

'If we don't take action now,' Berkman said in the hearing, 'we face an entire generation of kids addicted to nicotine, who are human guinea pigs for the Juul experiment overall.'

She recounted a visit by Juul representatives earlier this year in which they offered the tribal council a 'switching program' and free starter kits as part of an implied harm reduction effort and public health study. The tribe was 'unfairly exploited,' O'Leary said.

Republican Rep. Michael Cloud said at the hearing that e-cigarettes may have a role in smoking cessation, but said 'we do need to be clear about one thing. No one wants kids to use tobacco, no one wants kids vaping, and no one wants vaping companies to target children with advertisements.'

Pressley said that 'many of Juul's tactics seem to be right out of the Big Tobacco playbook,' pointing out that for decades, tobacco companies targeted black communities, especially with menthol cigarettes.

'It's extremely disturbing,' she said. 'We've been here before. We don't need a bunch of studies. The only studies we need are the millions of casualties that are behind us and that we run the risk of seeing ahead of us.'