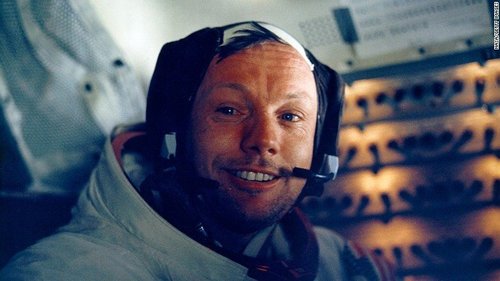 The family of astronaut Neil Armstrong was paid $6 million by a hospital as part of a wrongful death settlement, according to a report from...

The family of astronaut Neil Armstrong was paid $6 million by a hospital as part of a wrongful death settlement, according to a report from The New York Times.

Mercy Health reportedly paid the secret settlement in 2014, two years after Armstrong's death in 2012, the Times reported. Probate documents confirm the funds were distributed as part of a wrongful death and survival claim.

News of the settlement comes only days after the 50th anniversary of Armstrong's historic walk on the moon as part of the Apollo 11 mission.

His family attributed his death to complications from coronary bypass surgery saying at the time, 'We are heartbroken to share the news that Neil Armstrong has passed away following complications resulting from cardiovascular procedures.'

The New York Times reported Tuesday that Armstrong's sons believed that his death was due to incompetent post-surgical care at Mercy Health — Fairfield Hospital and threatened legal action against the hospital.

Although the hospital defended its actions and the care Armstrong received, they ultimately decided to pay out the settlement and avoid a legal battle, The New York Times article said.

The newspaper reported that it received mail from an unknown source with 93 pages of documents outlining Armstrong's treatment and the resulting legal case surrounding it. Included in those documents were reports from medical experts on both sides and correspondence between attorneys for the hospital and Armstrong's family, the newspaper said.

In one exchange, according to the Times, Nancy Lawson, an attorney for Mercy, wrote to Wendy Armstrong, the family's attorney in the settlement, asking whether Armstrong's sons would talk about the claim. 'Do Mark and Rick intend to discuss the wrongful death claim at the Kennedy Space Center if no settlement is reached by Friday, July 18?' the letter read.

Three expert medical reviews that accompanied the documents sent to the New York Times show what happened after Armstrong was admitted to Fairfield Hospital with suspected heart disease.

But when those wires were removed Armstrong experienced internal bleeding and low blood pressure which required further procedures be performed, according to the newspaper's report.

He was taken into a catheterization lab and then to an operating room, The New York Times report says.

Documents obtained by The New York Times do not show what happened in the operating room.

'The decision to go to the cath lab was THE major error,' Dr. Joseph Bavaria, a vice-chair of cardiothoracic surgery at University of Pennsylvania wrote in a review conducted at the request of the Armstrong family and obtained by The New York Times.

Another doctor, Dr. Richard Salzano, a cardiothoracic surgeon at Yale Medical Center, said the catheterization lab was 'certainly riskier than taking the patient to the O.R.' but 'defensible.'

Dr. J. Stanley Hillis, a doctor for the hospital, defended the treatment Armstrong received according to the documents.

In a statement to CNN Tuesday, Mercy Hospital declined to discuss the case but said that they were disappointed that the issue had been brought to light.

'The public nature of these details is very disappointing -- both for our ministry and the patient's family who had wished to keep this legal matter private,' the statement said.

'Our focus on advanced, high-quality, patient-centric care is a cornerstone of our ministry, and our commitment to our Mission is unwavering - we extend the compassionate ministry of Jesus by improving the health and well-being of our communities and bring good help to those in need, especially people who are poor, dying and underserved. This is our promise to every patient who comes through our doors.'