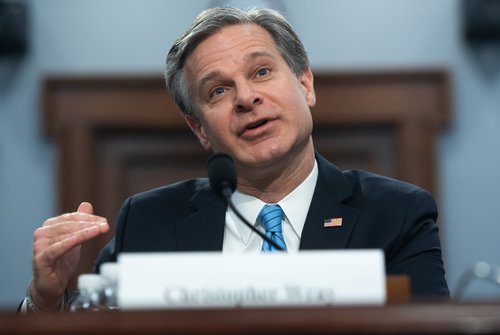 FBI Director Christopher Wray warned Tuesday that Russians are still carrying out foreign influence operations on the United States, despite US efforts to de...

FBI Director Christopher Wray warned Tuesday that Russians are still carrying out foreign influence operations on the United States, despite US efforts to deter them ahead of another presidential election.

'The Russians are absolutely intent on trying to interfere with our elections through the foreign influence,' Wray testified to the Senate Judiciary Committee.

Wray said the FBI has 'significant resources devoted' to combating foreign influence in the upcoming election. He told Sen. Lindsey Graham of South Carolina that he could not think of any more tools he needs from Congress on that front.

In one of his first moves as FBI director in 2017, Wray stood up a Foreign Influence Task Force that pulled resources from across the agency's units to work to combat online efforts to sway the opinion of American voters with false information.

The special counsel's extensive report, released publicly in April, accused Russia of waging a 'sweeping and systematic' influence campaign during the 2016 election.

At this year's G20 meeting, President Donald Trump issued a light-hearted warning to Russian President Vladimir Putin, laughing and smiling as he told his counterpart: 'Don't meddle in the election, please.'

Wray and other intelligence security officials held a classified election security briefing with Congress earlier this month. Senate Democrats emerged from the meeting complaining that the Trump administration is still not doing enough to thwart foreign actors. Republicans have argued that improvements to the election system were made in the last Congress and that further reforms, if needed, should be made by states.