The heat wave is causing sunflowers to bloom early 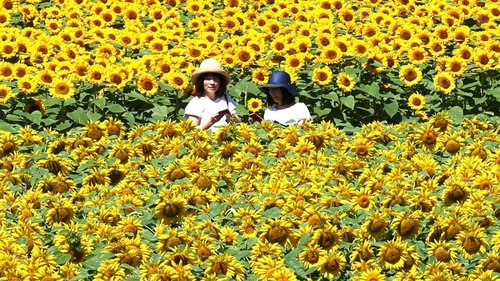 Whether it's for love of nature or love of Instagram, sunflower tourism is blazing hot this time of year. And in some places, the nationwide heat wave is cau...

Whether it's for love of nature or love of Instagram, sunflower tourism is blazing hot this time of year. And in some places, the nationwide heat wave is causing these photogenic flowers to pop their heads up earlier than usual.

The 20-acre sunflower field at Green Door Gourmet in Davidson County, Tennessee, is a big attraction for local tourists and even some botanical die-hards who travel from as far away as Canada.

Green Door Gourmet's chief farm operator, Sylvia Ganier, told CNN affiliate WTVF that its recent crop of sunflowers sprouted early, much to the delight of people who flock to get selfies and spend a little time in the sea of sunshine.

"The heat really pushed their bloom time forward," she said.

However, early blooms can cause problems. Ganier says the overenthusiastic flowers are making it harder to plan and plant other flower crops. Because, after all, sunflower season can't last forever.

If you're interested in some midsummer sunflower spectating, don't worry. Just because a few fields have bloomed early doesn't mean the season is completely out of whack. Mark Carroll, a biologist with the South Carolina Department of Natural Resources, says it all depends on when the flowers are planted.

One of the sites Carroll works with is the Draper Wildlife Management Area near Brattonsville, South Carolina, which includes a 20-acre swath of sunflowers. Carroll says the sunflowers are so popular, he gets overrun with calls from people interested in their status.

"Sometimes, I can barely get any work done, there are so many people calling, wanting to come and look at them," he said. "Eventually, I put a message on the answering machine, letting people know when they were going to bloom."

Sunflowers are warm-weather plants, but their bloom times can vary. The seeds at the Draper Wildlife Management Area were planted in May and started blooming around the first of July. But some sunflower hot spots are predicting blooms through August.

At wildlife management areas like the one in Brattonsvile, the sunflowers aren't planted primarily for social media fodder. They're actually "Dove Management Fields" that set the stage for mourning dove hunting season in September.

"That's when they're starting to dry out and drop seeds for wildlife to eat," Carroll explains. "The seeds attract mourning doves just in time for the public hunting season."

There is something very metal about a field of sunflowers transforming into a reaping ground for doves, but save those thoughts for your next Instagram post.

Speaking of Instagram, it's no wonder that the image-conscious side of social media has taken a shine to the sunflower. Dave Diggs, owner of the Sunflower Garden in Westminster, Maryland, says he thinks Facebook and Instagram have helped catch people's interest and sustain a unique fascination with the bloom.

"The sunflower is certainly a hot flower this year, and it has been for a while, perhaps more than any other flower I can recall," he said.

Diggs says that sunflowers are affected by the heat, and it could definitely make them bloom sooner. But places like the Sunflower Garden plant several times a season, so a premature bloom isn't really that big of a deal.

"However, we did have a cooler spring than normal," he said, "So that definitely slowed things down at first."

It's not just the temperatures the sunflowers are susceptible to; they really do "follow the sun" throughout the day. Scientists have settled on a few reasons and mechanisms for this behavior. Is it so you'll always be in good lighting for your Instagram pics? No, but you're free to believe that if you want.