A former Ohio judge was dragged from court after her sentencing 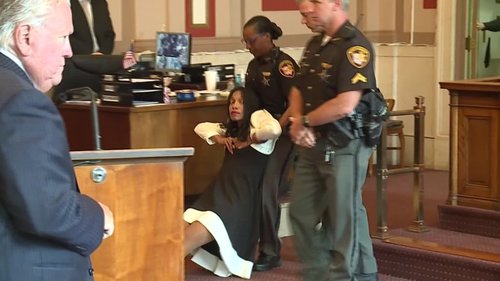 A former Ohio judge was dragged out of court after being sentenced to six months in jail.The courtroom erupted Monday after former Hamilton County Juv...

A former Ohio judge was dragged out of court after being sentenced to six months in jail.

The courtroom erupted Monday after former Hamilton County Juvenile Court Judge Tracie Hunter was sentenced. Video from CNN affiliate WLWT showed people jumping out of their seats and yelling at the judge and court staff.

A woman wearing a "Justice for Judge Hunter" shirt rushed at officers after the sentencing and was quickly taken into custody.

In the chaos, Hunter, showing little emotion, went limp and was dragged out of the courtroom by a bailiff as people screamed "No justice!"

The sentencing came after Hunter was found guilty of helping her brother, a county employee, keep his job, according to WLWT. She was convicted of having an unlawful interest in a public contract, a fourth-degree felony, WLWT reported.

Hunter had been free on appeal after being accused of mishandling a confidential document in 2014, according to CNN affiliate WCPO.

Despite a letter from the mayor and pushback from the community, Judge Patrick Dinkelacker imposed the six-month sentence, WCPO reported.

"What she wants to do is play by her own set of rules," Scott Croswell, a special prosecutor during Hunter's trial in 2014, said at Monday's sentencing hearing. "That's the very attitude and the very conduct that put her in the predicament that she's in and, frankly, has caused all this pain to her and caused all this turmoil to the community."

Attorney David Singleton defended his client to WLWT, saying he believes she was wrongly convicted. He asked the judge to delay her sentence because he plans to file a motion to dismiss the case.

"She's lost everything almost," Singleton said. "She lost her job as a judge, her law license, her ability to earn an income. She's lost peace of mind."

Hunter is being held at the Hamilton County Justice Center's medical facility, WLWT reported, likely because of injuries she suffered in a car crash three decades ago.

Jail officials told WLWT Hunter will be evaluated to see if she can participate in any early release programs they offer.