Apollo 11 lunar samples were searched for signs of life 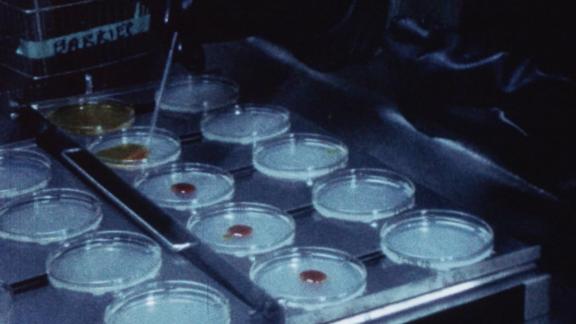 After astronauts from the Apollo 11 mission brought back samples from the moon, scientists at NASA searched for signs of extraterrestrial life.

When the Apollo 11 astronauts returned to Earth after their historic moon landing, they brought back lunar samples for scientists to study. In light of the 50th anniversary of the first lunar landing, which occurs Saturday, NASA has released rare footage of those scientists checking the samples for signs of life.

In the footage, biologists and chemists can be seen studying the samples at NASA's Ames Research Center in California. They worked with the samples in a clean room to rule out any possibility of corrupting them.

"We were really concerned about contaminating the samples with our own bacteria," said Caye Johnson, a now-retired biologist from Ames who worked with the Apollo lunar samples. "We had to be careful that we didn't introduce a microbe into the samples and then falsely say that we'd found life."

NASA said the clean room that was used to open and study the samples was even more pristine than a sterilized surgical room.

The exterior of the packages used to transport lunar soil samples at Ames were sterilized before the scientists opened them, and that was just the initial layer. They were packaged within a series of jars inside of jars contained in bags.

The scientists also used sealed boxes that contain a flexible glove on each side, called glove boxes, to open and study the samples. Higher air pressure within the boxes prevented air flow or contamination. They were bedecked with smocks, boot covers, gloves and masks.

Although it wasn't believed that there was life on the moon, the possibility couldn't be ruled out entirely until lunar samples could be studied, the agency said.

The studies, which were conducted at both Ames and Johnson Space Center in Houston, showed that the moon did not support any life. It was the first time NASA used material from another astronomical body in the search for life outside of Earth.

The intriguing experiments carried out on the lunar samples were intended to encourage any potential life within them. Nutrients and conditions suitable for life were provided to the samples, and then they were inspected for signs of growth of reproduction. But months passed and no life was detected.

"Why were we doing 300 different environments? Because on Earth today, bacteria live in all sorts of strange environments that you wouldn't expect," Johnson said.

It was the beginning of astrobiology and at Ames, it was part of the Life Sciences Directorate. The group started in 1961 and by 1970, one-fourth of the rapidly growing group included female scientists. Researchers in this field study the origin, evolution and future of life as we know it, on Earth and searching for signs of it throughout the universe.

The experiments helped establish methods that were used to study meteorites and helped inform the Viking mission's experiments on Mars in 1976.

NASA's Artemis program intends to reestablish a human presence on the moon by landing the first woman there in 2024. Part of that program will include new science experiments, in part because the Apollo program visited only certain regions of the moon. Lunar samples from other parts of the moon could provide a better understanding of the history of our solar system, among other new insight.