Why some Amazon workers are going on strike on Prime Day 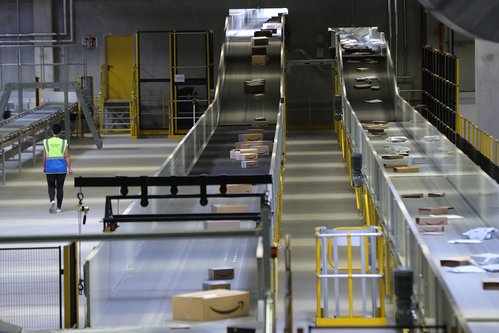 At a time of rising activism among workers, some A...

At a time of rising activism among workers, some Amazon employees are using Prime Day to protest their pay, working conditions and a range of other issues.

Prime Day is the biggest event of the year for Amazon, which has built one of the most efficient supply chains in the world. But some warehouse workers say they face too much pressure to fulfill delivery orders as it is -- and now Amazon is moving to offer free one-day shipping for Prime members. Workers worry that change will increase the strain they're under.

In Shakopee, an estimated 100 workers at an Amazon warehouse are expected to walk out Monday in protest of the pace they have to work on the job. The Shakopee protests are one of several on Prime Day, which will run for two days this year.

Amazon, however, defended its pay and worker policies. A spokesperson said the company offers "industry-leading pay of $15 per hour, benefits, and a safe workplace for our employees."

The company also fired back at critics: "Events like Prime Day have become an opportunity for our critics, including unions, to raise awareness for their cause," the spokesperson said. "These groups are conjuring misinformation to work in their favor."

The Monday protests kicked off with workers at Amazon facilities in Germany striking over pay. The strikes in Germany were held under the slogan "No more discount on our incomes." Amazon has been embroiled in a dispute with German trade unions, and the company's workers in Germany have staged frequent strikes and protests in recent years.

"While Amazon throws huge discounts to its customers on Prime Day, employees lack a living wage," said one German union.

In the United Kingdom, the labor union GMB -- which represents Amazon workers -- held protests outside Amazon fulfillment centers. "We're staging protests across Amazon sites up and down the country this Prime Day," said Mick Rix, a union leader. "The conditions our members work under at Amazon sites across the UK are appalling."

Although Amazon raised starting wages to $15 an hour for all US employees last year, frustration among some workers lingers. Prime Day protests and rallies are slated to take place in New York, San Francisco, Seattle and Washington, DC, in addition to the Shakopee demonstration. Democratic presidential candidates, including Sen. Bernie Sanders and Sen. Elizabeth Warren, threw their support behind the protests.

"The main issue is with the speed of the work and the physical stress and mental stress," said Stolz, the Shakopee worker who has been with Amazon for two years. "We have an opportunity. If Amazon wants to get your packages out in one to two days, it has to treat its workers with respect."

Stolz said the employees decided to take action on Prime Day because it will be one of Amazon's "busiest times of the year."

Many of the Amazon workers in Shakopee are Muslim immigrants from East Africa, and some of their demands are for prayer spaces, and easing speed and rates during Ramadan when employees are fasting.

The Shakopee workers' Prime Day protests are part of an ongoing organizing effort at this location. Last year, workers at the warehouse met with Amazon management to press for changes, but claimed their main concerns went unaddressed. In December, workers staged a walkout.

Shakopee workers are expected to be joined by Amazon workers traveling from the company's headquarters in Seattle. The tech workers traveling to Minnesota are part of Amazon Employees for Climate Justice, a group that has pressured Amazon to take action on the climate crisis.

Pilots for Amazon Air, the company's air cargo operation, also said they "stand in solidarity with the warehouse workers" in Shakopee. They are sending a pilot to the Minnesota protest.

"As we know firsthand, Amazon's business model too often neglects the well-being of the workers who make the e-commerce giant so incredibly successful," said Daniel Wells, a union leader representing pilots who fly for Amazon Air.

Activists also rallied outside of Jeff Bezos' home in New York City on Monday, demanding that Amazon cut reported web services contracts with Immigration and Customs Enforcement and "end abusive working conditions in its warehouses." Amazon has declined to comment on ICE contracts.

—CNN's Lydia DePillis and Charles Riley contributed to this article.