Almost 20% of nonsmoking workers are exposed to secondhand smoke on the job, study finds 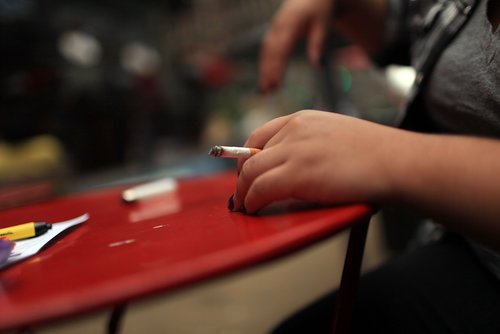 People who don't smoke can still be at risk for heart disease, lung cancer and stroke after they're exposed to secondhand smoke. Almost 20% of nonsmoking wor...

"Secondhand smoke exposure is an important public health issue ... and has been recognized as one of the top occupational hazards that contributes substantially to the prevalence of occupational cancer among nonsmokers," Dr. Sara Luckhaupt, a study author and preventive medicine physician in Cincinnati, said in an email. Luckhaupt is also a medical officer for the CDC.

Just over 10% of people reported frequent secondhand exposure at work, defined as twice a week or more. But some jobs have it worse than others.

In the commercial and industrial machinery and equipment repair industry, 65% of people reported secondhand smoke exposure, the most of any industry measured. The construction industry had the highest number of exposed workers at 2.9 million.

"The industries with the highest prevalence of secondhand smoke exposure and the highest number of exposed workers include outdoor workplaces and other settings that are unlikely to be protected by smoke-free laws," Luckhaupt said.

In states with no restrictions, 11% of people reported frequent exposure to secondhand smoke.

Previous studies have shown similar secondhand smoking exposure. "There are marked disparities in secondhand smoke exposure," said Brian King, a deputy director for the CDC's Office on Smoking and Health, who was not involved with the study. "There are geographical variations ... and higher rates of secondhand exposure in areas with lower number of smoke-free policies."

For the new study, researchers analyzed responses from 15,998 US employees, ages 18 and older, who took the 2015 National Health Interview Survey with the Occupational Health Supplement.

The study had some limitations, including smaller sample sizes in some jobs and the different distribution of industries by state. Participants self-reported their secondhand exposure, which could bias findings. Studies on secondhand smoke exposure are also limited to burned tobacco products and don't include e-cigarettes, according to King.

But the study's findings show that the "implementation of workplace smoke-free policies" can help reduce secondhand smoke exposure among workers and protect public health, the researchers wrote.

"Secondhand smoke exposure is responsible for over 40,000 deaths per year in this country," King said. "Even brief levels of exposure can be harmful."