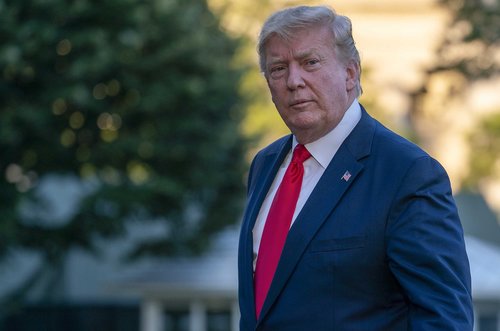 On Wednesday, President Donald Trump signed an executive order aimed at transforming kidney care for the more than...

On Wednesday, President Donald Trump signed an executive order aimed at transforming kidney care for the more than 37 million Americans with kidney disease. The administration said it is the first kidney-focused executive order since the 1970s.

'Today we are taking groundbreaking action to bring new hope to millions of Americans suffering from kidney disease,' Trump said. 'So many things don't get done in government, but now we are getting them done.'

The first goal of the executive order is to improve detection, diagnosis and treatment, in part through a public awareness campaign to prevent patients from going into kidney failure.

By some estimates, 96% of people with kidney damage or mildly reduced kidney function don't know they have a problem, according to the US Centers for Disease Control and Prevention.

When patients don't learn they're ill until it gets to a critical stage, they cannot take preventive steps, and often need dialysis or a transplant. Of the 100,000 Americans who start dialysis each year, 50% die within five years, according to the president.

The goal of the executive order is to reduce the number of end-stage renal disease patients by 25% by 2030.

Kidney disease is a large and growing public health problem, that will get worse since obesity is a known risk factor. The majority of American adults are considered overweight or have obesity.

The second goal of the executive order is to increase access to affordable options for patients with end-stage renal disease. That includes providing a new Medicare payment structure that would encourage more in-home care, rather than treatment at dialysis centers.

The US Department of Health and Human Services said it would like to have 80% of new patients in 2025 either receiving dialysis at home or receiving a transplant.

Patients in a center-based treatment spend about 12 hours a week there, making it difficult to keep a regular job. Studies have also shown in-home treatment improves quality of life overall, gives patients greater autonomy, and lower costs and hospitalizations overall.

The administration also hopes to encourage the development of wearable artificial kidneys as an alternative to dialysis.

The third goal is to double the number of kidneys available for transplant by 2030.

There are nearly 100,000 Americans on the waiting list to receive a kidney transplant, Trump said. The mortality rate for people with kidney disease makes it the ninth leading cause of death in the United States.

The order will create new payment models as an incentive for treatment centers to modernize the organ transplant system. It will also call on Health and Human Services to improve support for living kidney donors, such as covering costs for child care and lost wages for living donors.

Currently, experts say there are some barriers for living donors that include the possibility that they would lose their life insurance if they donate or face higher insurance rates. Those issues weren't addressed in the signing ceremony. There is, however, a bill in Congress that would prohibit the denial of coverage or increased premiums when someone becomes a living donor.

HHS Secretary Alex Azar said there will be new payment models encouraging patients to receive transplants, rather than remain on dialysis.

The US government currently spends more than $114 billion each year on patients with kidney disease. That is one-fifth of the spending of all Medicare dollars, Azar said. Azar believes the executive order will save money in the long run.

Dr. Holly Kramer, president of the National Kidney Foundation and a nephrologist at Loyola University Medical Center, characterized the executive order as 'a major win in the battle against kidney disease.'

'They have thought about the entire spectrum of kidney disease from better detection to better dialysis therapies and better access to transplantation,' Kramer texted from the event. 'We are so thrilled.'

'This is a big and positive policy change for patients and caregivers,' said Rick Lofgren, president and CEO of the Children's Organ Transplant Association.

For the Trump administration, kidney disease is personal. First lady Melania Trump underwent an embolization procedure to treat a benign kidney condition in May.

At Wednesday's event, Azar spoke about how his father suffered from end-stage renal disease.

'I saw how burdensome kidney disease can be and how important it is to give patients more options,' Azar said.

Asked at a press event before the signing ceremony whether first lady Melania Trump or her office had any involvement in the executive order, given her own kidney procedure last year, Domestic Policy Council director Joe Grogan did not answer. 'This is in the wheelhouse of the type of problems the President likes to confront,' Grogan said, noting that this was an area 'the President understood needs to be addressed,' and that he is 'very proud to be taking this initiative.'