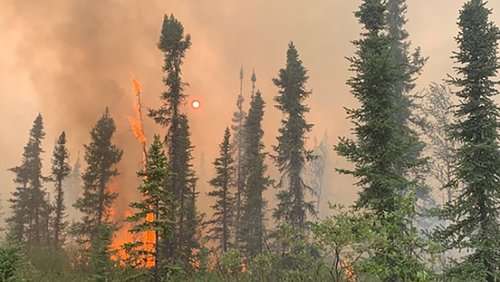 145,321 acres: That's the size of the largest wildfire burning this year, according to a map from...

145,321 acres: That's the size of the largest wildfire burning this year, according to a map from Alaska Wildland Fire Information, the state's interagency effort to track fires.

The Hess Creek Fire has been burning since June 21 in the middle of the state near Livengood, about 80 miles north of the city of Fairbanks.

Livengood covers hundreds of square miles but has a population of only 13, according to census data.

"We're all socked in with smoke," said Sarah Wheeler, a spokeswoman for the firefighting effort on the ground. "It's a smoky mess."

Across the country, it's not as bad as last year

But she added that because the area is so sparsely populated, the Hess Creek Fire "doesn't rise to the level of complete suppression."

She said the fire is close to some cabins in the area, and there were water pumps set up to fight the blaze around those structures. "Most of them are not permanent residences," she said.

All told, there are 782,681 acres on fire in the United States, and more than 550,000 of them are in Alaska, according to the National Interagency Coordination Center situation report.

"Alaskans are used to living with fire," Wheeler said.

The number of charred acres in wild Alaska has passed the 505,900 acres that burned in California during that state's record year in 2017.

Despite their size, Alaska's fires don't infringe as much on human habitation. By contrast, many of the devastating fires in California over the past couple of years blazed in and around populated areas.

And nationally, the first half of this year pales in comparison this time last year. In 2018, there were 31,536 wildfires through July 9, and this year, there were just over 21,000 reported in the same period.