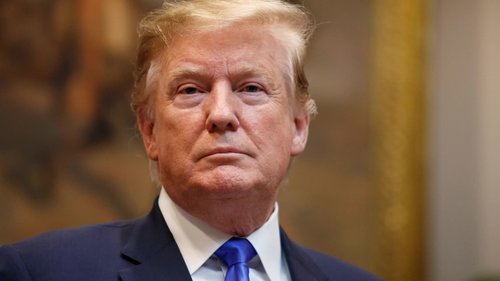 The 2nd US Circuit Court of Appeals upheld a New York judge's ruling and found that Trump 'engaged in unconstitutional viewpoint discrimination by utilizing Twitter's 'blocking' function to limit certain users' access to his social media account, which is otherwise open to the public at large, because he disagrees with their speech.'

'We hold that he engaged in such discrimination,' the ruling adds.

The judges on the appeals court concluded that 'the First Amendment does not permit a public official who utilizes a social media account for all manner of official purposes to exclude persons from an otherwise-open online dialogue because they expressed views with which the official disagrees.'

The challenge to Trump's unprecedented use of Twitter in office came from seven individuals he blocked, as well as the Knight First Amendment Institute, which argued that the President's personal account is an extension of his office.

The Justice Department argued in March that the President wasn't 'wielding the power' of the federal government when he blocked certain individuals from his personal Twitter account, @realDonaldTrump, because while the President sends tweets in his official capacity, he blocks users as a personal matter.

But the appeals court disagreed with that view.

'The irony in all of this is that we write at a time in the history of this nation when the conduct of our government and its officials is subject to wideâ€open, robust debate,' they wrote. 'This debate encompasses an extraordinarily broad range of ideas and viewpoints and generates a level of passion and intensity the likes of which have rarely been seen. This debate, as uncomfortable and as unpleasant as it frequently may be, is nonetheless a good thing. In resolving this appeal, we remind the litigants and the public that if the First Amendment means anything, it means that the best response to disfavored speech on matters of public concern is more speech, not less.'

Tuesday's ruling affirms the position taken last year by a New York federal judge, who ruled that Trump had violated the Constitution when he blocked Twitter users.