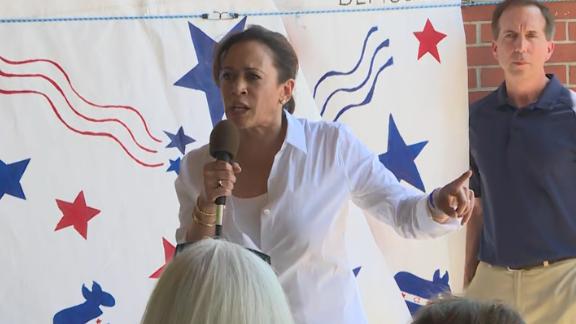 Iowa voters weigh in on presidential candidate Sen. Kamala Harris (D-CA) as she makes a push in Iowa ahead of the Iowa caucuses. CNN's Kyung Lah reports.

California Sen. Kamala Harris unveiled a $100 billion plan to invest in black homeownership -- a proposal the 2020 presidential candidate said that, if elected, would set in motion her broader plan to tackle the US racial wealth gap.

"So we must right the wrong and -- after generations of discrimination -- give black families a real shot at homeownership -- historically one of the most powerful drivers of wealth," Harris said in a speech Saturday at the Essence Festival in New Orleans in what promises to be the beginning of a series of policy rollouts focusing on the black community.twitter.com

Harris entered the room inside the Ernest N. Morial Convention Center to a standing ovation. Speaking at the lectern, she greeted the majority black woman crowd cast in purple and yellow set lights with a proper welcome, "Good morning, my beautiful sisters."

Under Harris' proposal, homebuyers who rent or live in historically redlined communities can apply for a federal grant of up to $25,000 to assist with down payments or closing costs. Harris' campaign estimates that this will help up to 4 million families.

Redlining is the discriminatory practice of denying financial or other services for low-income and minority communities.

During a conversation with civil rights leader Al Sharpton among others, Harris tied homeownership to the ability for students to be able to pay for higher education and loans.

Harris said black Americans have been "institutionally and historically deprived legally from having access," to the greatest source of assets and wealth that a family can have, which is housing.

"When our kids want to go to college, where as other families who own their home and can go into the equity in their home to help pay for their students' tuition, our families have to go and those students have to take out loans and at interest rates that they can't afford to pay off over a long period of time," Harris said.

"People that are my age, all of my friends, are starting to look at life like, 'Okay, well maybe I'm ready to like move out of my parents' house,' " Thomas said in an interview with CNN.

"Having her providing us with the access to better be able to like compete in that market and actually sustain ourselves in that market, I only hope for the best and I feel like we can only go up from there."

Thomas says she's still undecided but leaning toward Massachusetts Sen. Elizabeth Warren because of her student debt cancellation proposals. Still, for Thomas, "anything that can help the black community as a whole? I'm always going to support."

"By taking these steps we can shrink the wealth gap between black and white households by at least one third," Harris said.

In May, Harris reintroduced her 2018 bill to tackle racial disparities in maternal health and rolled out her proposal to fine companies that don't achieve pay equity.

Brenda Hunt, a 61-year-old law enforcement officer, said Harris' proposals like teacher pay and now black home ownership, along with her debate performance are reasons why the California senator is her leading candidate.

"She's helping those that try and strive so hard to achieve something, but they can't because they just don't know how -- she's laying down on a good path," Hunt told CNN. "If we can help her get in and she can get it done, we can finally see a better change because Obama started it, but the current person is setting us back."

Harris' housing proposal is the beginning of her campaign rollout of a multi-pronged agenda specifically aimed at fixing issues that disproportionately affect people of color.

"And in the coming weeks I'll announce new investments to support black entrepreneurs and business owners by increasing access to credit and capital," Harris said Saturday.

Circling back to the strides that black woman have made in the country, Harris grounded her candidacy in that of black activists and politicians.

"The fight of black women has always been fueled and grounded in faith and in the belief in what is possible," Harris said.

"We have always built the future that we can see, and believe in, and fight for. It's why Sojourner spoke. It's why Mae flew. It's why Rosa and Claudette sat. It's why Maya wrote. It's why Fannie organized. It's why Shirley ran. And why I stand here as a candidate for President of the United States."

Woman in critical condition after motorcycle crash in Fort Wayne