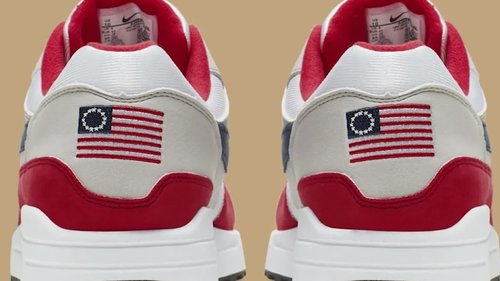 A veteran-owned company is facing off against Nike again, this time over a Revolutionary War-era flag.Nine Line Apparel, a Georgia-based company found...

A veteran-owned company is facing off against Nike again, this time over a Revolutionary War-era flag.

Nike was set to release a USA-themed Air Max 1 this week but, according to The Wall Street Journal, asked stores to return the shoes after complaints from former NFL star and activist Colin Kaepernick.

'Nine Line Apparel, along with relentlessly patriotic Americans everywhere, cannot believe the total ignorance and lack of understanding displayed by both Colin Kaepernick and Nike in relation to our country's Betsy Ross flag, it's symbolism and meaning,' Nine Line Apparel says on its website.

The special-edition Air Max 1s featured the 'Betsy Ross' flag, a design created during the American Revolution with a circle of 13 white stars for the 13 original states. The Wall Street Journal said Kaepernick and others were critical of the flag's ties to an era of slavery.

'Nike made the decision to halt distribution of the Air Max 1 Quick Strike Fourth of July based on concerns that it could unintentionally offend and detract from the nation's patriotic holiday,' Nike said in a statement. 'Nike is a company proud of its American heritage.'

Nine Line Apparel, which calls itself a company 'by patriots for patriots,' has gone after Nike and Kaepernick before.

In September, the company released 'Just Stand' t-shirts in response to Nike's ad campaign highlighting Kaepernick's decision to kneel during the national anthem to protest police brutality and racial injustice.

Merritt is calling for a full boycott of Nike, according to CNN affiliate WJCL.

'The American people should support the red, white and blue and boycott Nike and join our #NoToNike campaign. Nike says 'just do it.' We say just stand -- stand for your beliefs and for your country,' he said.

Garrett woman accused of killing her husband after autopsy report