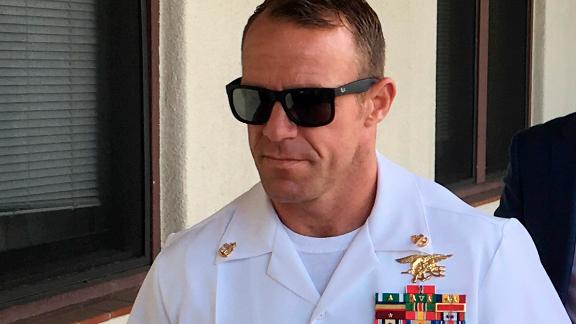 Decorated Navy SEAL team leader Eddie Gallagher was acquitted of nearly all charges in the death of an ISIS prisoner in Iraq, including premeditated murder.

But a jury of seven soldiers in his court-martial found him guilty of posing for a photo with the 12-year-old ISIS fighter, an offense carrying a maximum sentence of four months.

Navy prosecutors said that Gallagher took the photo after fatally stabbing the detainee while he was being treated by US medics. The verdict marked the culmination of a military trial in which fellow SEALs offered contrasting accounts of Gallagher's behavior in 2017 in Mosul, Iraq.

Two witnesses testified for the prosecution that they saw Gallagher fatally stab the victim. One of them, however, altered his story for the first time on the stand and said that although Gallagher stabbed the victim, he caused the victim's death by suffocating him, not Gallagher.

The jury will return Wednesday to deliberate his sentence after hearing testimony on his behalf from two doctors, a family friend and a colleague.

Gallagher's lawyer, Tim Parlatore, said Gallagher is likely to go home Wednesday since he has already spent more than four months in pretrial custody. He called the verdict a 'huge weight' off Gallagher's shoulders and a 'victory for justice.'

Gallagher's wife said the verdict meant her family was 'finally vindicated' after being 'terrorized' by a government that her husband had fought for.

'He's fought every major enemy of the United States. He is a righteous and noble individual,' Andrea Gallagher said outside court Tuesday.

'I think this whole thing is disgusting. I want responsibility to be claimed by Naval Special Warfare.'

Gallagher's defense never disputed that Gallagher took the photo and texted it to someone with the caption 'good story behind this, got him with my hunting knife.'

The defense said neither the photo nor any other forensic evidence proved that Gallagher killed the detainee or tried obstruct the investigation.

The defense portrayed Gallagher as an 'old-school, hard-charging warrior' who was targeted by younger 'millennial' SEALs who harbored 'personal animosity' toward him.

Several SEALs testified under immunity that they took pictures with the body with Gallagher. One of them described it as a 'trophy photo' to celebrate the success of the mission.

Gallagher was acquitted of obstruction of justice charges based on allegations that he tried to pressure other SEALs not to report him. The jury also found him not guilty of attempted murder stemming from accusations that he shot at noncombatants in unrelated incidents.

Prosecutors said the photo, along with Gallagher's own words and actions, proved that he intentionally killed the teen and then tried to conceal what happened.

In the prosecution closing argument, Commander Jeff Pietrzyk acknowledged that the victim was not a sympathetic figure.

But he was in the care of US servicemen and 'no longer a lawful target,' Pietrzyk said.

ISIS might have done worse to its captives, Pietrzyk said, but 'we are not ISIS.'

The case took an unexpected turn when a key prosecution witness testified that he caused the prisoner's death, not Gallagher.

Special Operator First Class Corey Scott, a SEAL medic, said that he saw Gallagher pull out his knife and stab the prisoner under his collar bone at least once.

On cross-examination, Scott told the defense that he never saw any blood after the stabbing. That's when Scott claimed he caused the prisoner's death by holding his thumb over his trachea tube until he suffocated.

Scott described the killing as an act of mercy because he was concerned the boy -- a prisoner of the Iraqi forces -- would be tortured by the Iraqis.

Scott did not admit to killing the prisoner in previous interviews with investigators and prosecutors. He testified that he was only doing so now because he was granted immunity, which means he cannot be prosecuted for his testimony.

The prosecution called him a liar. He might now face a perjury charge.