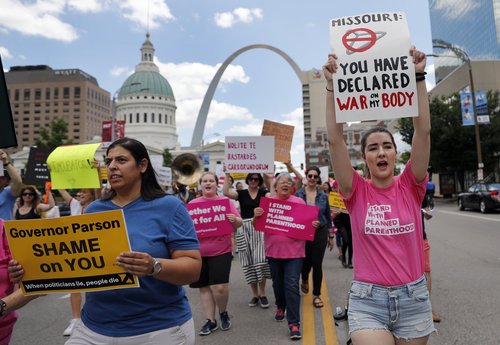 A Missouri judge issued an order Monday to keep a preliminary injunction in place allowing Planned Parenthood to continue performing abortions at its St. Lou...

A Missouri judge issued an order Monday to keep a preliminary injunction in place allowing Planned Parenthood to continue performing abortions at its St. Louis clinic until 5 p.m. Friday, according to a statement from Planned Parenthood of the St. Louis Region. Patients with appointments scheduled for this week will receive care, the clinic said Monday.

Circuit Court Judge Michael Stelzer's order gives Planned Parenthood more time to challenge a decision by the Department of Health and Senior Services to not renew the clinic's license, which expired May 31. The canceled license applied only to abortions, not the other services offered by Planned Parenthood, according to department Director Randall Williams.

If the clinic loses its license, Missouri will become the first state without an abortion clinic in almost 50 years.

St. Louis Planned Parenthood sued the department for failing to renew the license. Its legal case will be decided by the Administrative Hearing Commission, a neutral and independent hearing officer for the state. Stelzer granted a preliminary injunction allowing the facility to keep performing abortions until the hearing, and Monday's decision continues this injunction.

Williams said his department did not re-up the license because Planned Parenthood failed to correct 26 of 30 deficiencies found by regulators, and abortion doctors refused to cooperate in the investigation. In one case, a patient had three abortion-related services in three days, Williams said: An unsuccessful surgical procedure was followed by an unsuccessful medical procedure and then by another surgery. Another patient had an abortion that failed, he said.

Dr. Colleen McNicholas, an ob/gyn with reproductive health services at Planned Parenthood of the St. Louis Region, previously told CNN that the department is trying "to distort the safety record" of the clinic to distract from its true goal of shutting down abortions. McNicholas said that patient confidentiality laws prevent her from discussing cases but that the St. Louis Planned Parenthood clinic had a complication rate lower than 1% among the 3,000 to 5,000 abortions it performs in a year. "The risk of complications is incredibly low," she said.

In May, Republican Gov. Mike Parson signed into law a bill banning abortions at eight weeks, including instances in which a woman seeks to terminate a pregnancy resulting from incest and/or rape. The law, which includes exceptions for when a mother's life is at risk or when she faces a serious permanent injury, is scheduled to take effect August 28.

Throughout 2019, states have mounted challenges to Roe v. Wade, the 1973 Supreme Court ruling that made abortion legal in all 50 states. Alabama's dispute is most restrictive in that it bans virtually all abortions and could send doctors to prison for life if they perform the procedure. That law, slated to go into effect this fall, is being challenged in court.