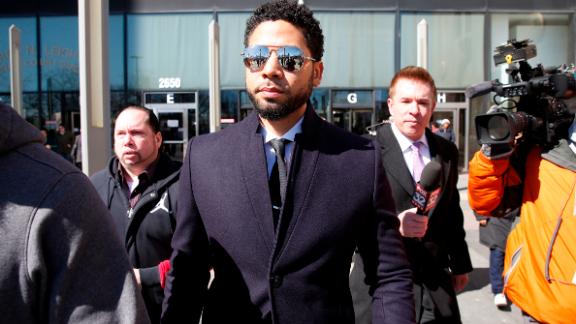 Chicago police have released dozens of hours of footage from the investigation into the attack Jussie Smollett reported he suffered. CNN's Ryan Young has the details.

Chicago police released body camera footage on Monday that showed Jussie Smollett with a white rope tied in a noose around his neck the night he reported he was attacked by two men.

The body camera video is part of over 70 hours of video Chicago police released to the media.

The gay black actor claimed in January that he'd been the victim of a hate-fueled attack, but police in February claimed that Smollett had staged it.

More than 400 pages of search warrants and some text messages are part of the release. CNN is going through the video and documents.

While the videos do not show anything new, they do provide better context and reveal what exactly took place that night in January.

Smollett had a white noose around his neck

The body camera video from January begins with a man who identified himself as Smollett's creative director leading officers to the "Empire" star's apartment.

"He doesn't want that to be a big deal, you understand what I'm saying?" the man says in the video. "I just feel like he should report this. I know he's been getting some hate mail, he never showed it to me."

As officers enter Smollett's apartment, he's seen wearing a sweater with a white rope tied in a noose around his neck.

"Do you want to take it off or anything?" one of the officers ask.

"Yeah, I do, I just wanted y'all to see (inaudible)," Smollett says in the video before removing the rope. "They poured some bleach on me."

"You're filming this right?" the man says. The officers say yes.

"I don't want to be filmed," Smollett says. The man asks the officers to turn off their camera.

Chicago Police Superintendent Eddie Johnson said Smollett paid two brothers $3,500 to stage the attack and take "advantage of the pain and anger of racism to promote his career."

The brothers, Olabinjo and Abimbola Osundairo, were cleared when prosecutors announced Smollett had orchestrated a hoax.

Body camera video shows the Osundairo brothers walking side-by-side down a well-lit street in dark clothing. About five minutes later, they were followed by Smollett who was walking in the opposite direction in a white sweater similar to the one he was wearing in the video with a rope around his neck.

A separate video shows the brothers in the back of a taxi. It seems the brothers are trying to keep their faces hidden from the camera inside the taxi.

Both of the Osundairo brothers were arrested

One of the brothers was shown in body camera footage handcuffed at O'Hare International Airport.

The man -- it is not clear which brother it is -- can be seen loading his luggage in the car before being taken into custody. The man was wearing a black hooded sweatshirt and dark-colored pants and was seen taking off and unlacing his shoes.

In another video, one of the Osundairo brothers is seen getting handcuffed by Chicago police and escorted into the police precinct.