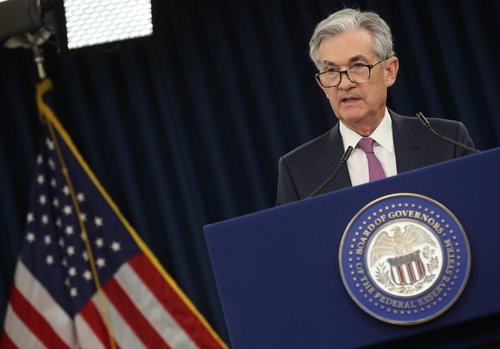 The US stock market has never been higher. Unemployme...

The US stock market has never been higher. Unemployment is at the lowest level in nearly half a century. But Wall Street is betting the Federal Reserve will slash interest rates — and the Fed doesn't want to disappoint.

Failing to cut rates would create a "hawkish shock" in financial markets that could send the S&P 500 plunging 7%, boost the US dollar and roil the bond market, Goldman Sachs predicted in a research report on Sunday. That market stress could spread to the real economy.

Due to the "Fed's fear of disappointing the market," the US central bank may drop interest rates by half a percentage point at the July meeting, Goldman analysts led by chief economist Jan Hatzius wrote in the client note titled, "The Cost of Doing Nothing."

The prediction suggests that the market has the Fed backed into a corner. The US central bank might need to lower rates — even if it doesn't want to. That's not the way it's supposed to work.

The Federal Reserve is also under enormous pressure from the most powerful person on the planet.

Arguing that the Fed "doesn't know what it is doing," President Donald Trump wrote on Twitter on Monday that the Dow would be "thousands of points higher" if the central bank hadn't raised rates last year.

"Now they stick, like a stubborn child, when we need rates cuts, & easing, to make up for what other countries are doing against us," Trump tweeted. "Blew it!"

Last week, the Fed kept interest rates steady but hinted that it could lower them in response to trouble in the economy.

Cutting rates in July could be a smart move should US-China trade talks fall apart, resulting in a new wave of damaging tariffs.

UBS warned on Monday that if escalation is not averted, global growth would be lower by three-quarters of a percentage point and the 10-year Treasury yield could plummet to 1.3%.

"The contours would resemble a mild 'global recession' " similar to the eurozone crisis, the collapse in oil prices in the mid-1980s and the "Tequila" Mexican peso crisis of the 1990s, UBS said.

If the United States and China fail to reach a deal, UBS noted, average US tariffs will rise to the highest level since 1947.

New evidence emerged on Monday of the economic pain from tariffs.

"The Chinese tariffs remain the wildcard, as it has started to take its toll on the electronics industry in which we are heavily involved," one machinery manufacturing executive said as part of a survey. "This tariff issue really needs to get settled."

An executive from a printing company said: "We cannot explain it, but we have gotten stupid slow, with incoming orders lagging way behind last year to date."

Fed could cut rates even if there's a trade deal

Market expectations of multiple rate cuts have risen so much that the Fed could be forced to act regardless of what happens in the US-China trade talks and the broader economy.

Goldman Sachs wrote that the Fed could lower rates by half a percentage point in July — or cut rates by more than that amount in 2019 — "even if the trade policy developments and the economic data do not signal a particularly worrisome outlook."

That's because the financial conditions would tighten if the Fed fails to meet Wall Street's expectations. Goldman Sachs estimated that a one-percentage point spike in short-term bond yields would likely spark a 7% decline in stocks, widen credit spreads and lift the US dollar by 2%. A stronger greenback makes US exports less attractive.

Tellingly, Goldman Sachs argued that financial conditions could tighten even if the Fed cuts rates, but by less than investors hoped for.

One possibility is that a trade deal emerges, causing investors to lower their bets of a rate cut and allowing the Fed to hold its fire, according to Ian Shepherdson, chief economist at Pantheon Macroeconomics.

That would make sense and lower the chances that the Fed allows the economy to run too hot, setting off inflation and blowing a financial bubble like the bubbles that formed in dotcom stocks in the late 1990s and the housing market last decade. Bank of America CEO Brian Moynihan told CNN Business last week that corporate debt is too high. It's easy to see how Fed rate cuts could make that issue worse.

"The alternative is that they cut anyway, either because they fear that not to ease would upset the stock market, or further annoy the president, or both," Shepherdson wrote in a note on Monday. "This is no way to conduct monetary policy."

Shepherdson said that the Fed's "itchy trigger-finger" can be explained by concerns that market turmoil will hurt business spending and consumer confidence.

That's what happened after markets plunged late last year. Business activity slowed down after US stocks suffered their worst December since the Great Depression. The "sharp and immediate" impact on business confidence and spending plans demonstrates that the "real economy is sensitive — and probably more sensitive than in the pre-2008 era — to the stock market," Shepherdson wrote.

The Fed clearly wants to "support the market," Shepherdson wrote, "fearing that a sustained decline would bring the expansion to a premature end."