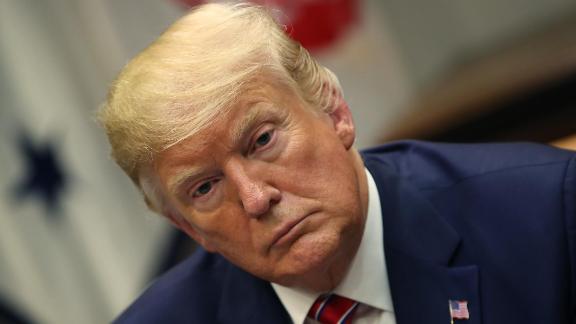 President Donald Trump on Friday responded to allegations of sexual assault after magazine advice columnist E. Jean Carroll alleged he had attacked her at a New York luxury department store in the late 1990s.

Carroll details the allegations in her forthcoming book, "What Do We Need Men For? A Modest Proposal," excerpts of which were published earlier Friday in New York Magazine. While Carroll does not appear to name Trump in the printed excerpt of the first-person account, he is named in the headline, which reads: "Hideous Men Donald Trump assaulted me in a Bergdorf Goodman dressing room 23 years ago. But he's not alone on the list of awful men in my life."

Trump denied the allegations in a statement Friday, saying he had "never met this person." He accused Carroll of sharing her account to raise book sales, comparing her to women who "falsely accused" Supreme Court Justice Brett Kavanaugh during his contentious confirmation hearings. The article published Friday includes a photo of Trump and Carroll talking in a group.

"Shame on those who make up false stories of assault to try to get publicity for themselves, or sell a book, or carry out a political agenda -- like Julie Swetnick who falsely accused Justice Brett Kavanaugh," Trump said. "It's just as bad for people to believe it, particularly when there is zero evidence. Worse still for a dying publication to try to prop itself up by peddling fake news -- it's an epidemic."

Carroll claims that she encountered Trump in the fall of 1995 or spring 1996 at the Bergdorf Goodman department store, where she says he attacked her in one of the dressing rooms.

According to Carroll's account, Trump sought her advice in buying a gift, and the two had met previously.

Carroll, who was 52 at the time, claims that while gift shopping, Trump pressured her to try on lingerie and grabbed her arm to pull her toward the dressing room.

"The moment the dressing-room door is closed, he lunges at me, pushes me against the wall, hitting my head quite badly, and puts his mouth against my lips," Carroll alleges. "I am so shocked I shove him back and start laughing again. He seizes both my arms and pushes me up against the wall a second time, and, as I become aware of how large he is, he holds me against the wall with his shoulder and jams his hand under my coat dress and pulls down my tights."

Carroll continues, "I am astonished by what I'm about to write: I keep laughing. The next moment, still wearing correct business attire, shirt, tie, suit jacket, overcoat, he opens the overcoat, unzips his pants, and, forcing his fingers around my private area, thrusts his penis halfway -- or completely, I'm not certain -- inside me."

Trump, in his denial Friday, also implied that Democrats could be involved in Carroll's "false accusations" but did not offer any details as to how.

"If anyone has information that the Democratic Party is working with Ms. Carroll or New York Magazine, please notify us as soon as possible," Trump said in the statement. "The world should know what's really going on. It is a disgrace and people should pay dearly for such false accusations."

Carroll says in the New York Magazine excerpt published Friday that she did not report the alleged incident to the police, but confided in two close friends. The two friends confirmed their accounts to the magazine, New York Magazine reports.

The department store confirmed to Carroll that it no longer has security footage from the time she claims the incident occurred.

Carroll has been an advice columnist for Elle magazine for 26 years. She posed for the New York magazine cover wearing a coatdress she claims she wore when she was attacked by Trump.

At least 15 other women have come forward with a range of accusations against Trump, ranging from sexual harassment and assault to lewd behavior, from before he was President.

The flood of accusations against Trump came during the 2016 campaign when a 2005 "Access Hollywood" video surfaced that showed him saying he was able to grab women "by the p**sy" because he was famous.

He apologized and dismissed his remarks on the "Access Hollywood" video as nothing more than "locker room" talk.

Trump also vehemently denied all of the womens' allegations made against him, and less than three weeks before the election, he threatened to file a lawsuit against "all of these liars" once the election was over.