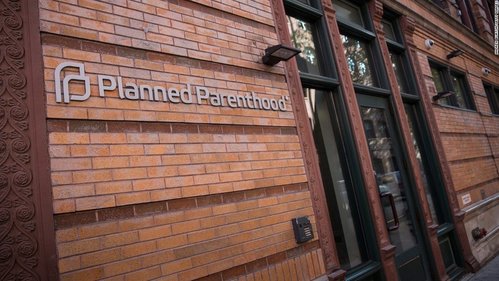 While Missouri teeters on the brink of becoming the first state...

While Missouri teeters on the brink of becoming the first state with no abortion clinics, the state's last clinic says it's refusing to comply with a law on pelvic exams.

And the timing could be significant. A judge ordered the Missouri Department of Health and Senior Services to decide by Friday whether it will renew a license for the clinic, Reproductive Health Services of Planned Parenthood of the St. Louis Region.

The drama unfolding in Missouri could have a ripple effect across the country as more states enact new laws on abortion access. Here's a look at what's happening, and what could happen next:

The St. Louis Planned Parenthood clinic is suing Missouri's health department for refusing to renew its license, which was supposed to expire May 31.

The state's health director has said the clinic has "issues," but would not specify what those issues were.

While the licensing dispute works its way through court, Judge Michael Stelzer granted a preliminary injunction that allows the clinic to keep performing abortions for now.

The health department must issue a decision by Friday as to whether it will renew Planned Parenthood's license.

Dr. Colleen McNicholas, an obstetrician-gynecologist at the St. Louis clinic, said that requirement is unnecessary -- especially because patients get pelvic exams the day of abortions.

"Patients have confirmed for us what we already knew -- that the additional medically unnecessary forced pelvic exam newly interpreted by the state is deeply traumatizing and inhumane," McNicholas said in a written statement.

"We believe continuing to force an additional invasive and uncomfortable vaginal exam on patients at least 3 days before her abortion procedure, when it is not medically indicated, and when she will have the identical exam on the day of the abortion procedure, is not patient-centered; it is disrespectful and dehumanizing."

"They require one during informed consent 72 hours prior to the abortion," Cox said.

Missouri is one of a handful of states that require patients to have "informed consent" counseling at least 72 hours before an abortion.

Supporters of such waiting periods say it gives women time to consider any health risks or reconsider the abortion altogether.

Opponents say waiting periods are an unnecessary barrier to abortion access, especially for low-income women who have to travel long distances and can't afford to stay in a different city for several days.

The health department defended the state law requiring pelvic exams prior to the day of an abortion.

"The information from a pelvic exam could influence the choice of the procedure or the method, which would change the information provided for informed consent," DHHS said.

"Because the information for informed consent must be provided at least 72 hours before the abortion, a pelvic examination must occur at that time."

What does Planned Parenthood's defiance mean?

Cox said it's too early to say whether the clinic's refusal to perform pelvic exams at the 72-hour mark will influence her department's decision on whether to renew the clinic's license.

"We will be able to address tomorrow," Cox said Thursday.

It's also too early to say whether Missouri's last abortion clinic will be forced to stop performing abortions on Friday.

That kind of outcome would depend on many variables, Cox said, including the health department's decision and whatever the judge may rule.