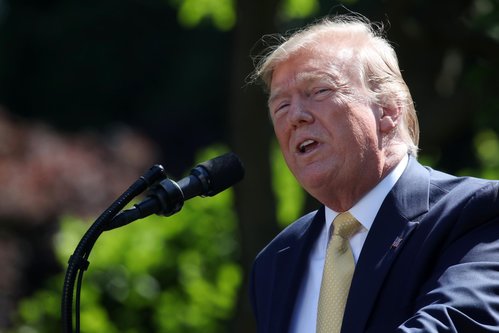 President Donald Trump downplayed the dramatic escalation in tensions with Iran Thursday, after the downing of a US drone near the Persian Gulf sparked fears that tensions with Tehran could spill over into confrontation.

Calling the shootdown 'a new wrinkle, a new fly in the ointment,' Trump told reporters in the Oval Office he finds it 'hard to believe it was intentional.'

Earlier in the day, Trump had tweeted that 'Iran made a very big mistake!' as he and his national security officials huddled to weigh possible responses. Some lawmakers called for restraint and others warned Iran should prepare for 'severe pain.'

Trump's ominous -- if vague -- tweet came after Iran's Revolutionary Guard said it had shot down an 'intruding American spy drone' after it entered into the country's territory Thursday. Trump told reporters later Thursday morning that the drone had been over international waters. Asked if the US would respond or go to war, Trump said, 'you'll find out.'

But he also appeared to want to lower the temperature.

'Probably Iran made a mistake. I would imagine it was a general or somebody who made a mistake in shooting that drone down,' Trump said during an exchange with CNN's Kaitlan Collins.

'I find it hard to believe it was intentional. I think it could've been somebody that was loose and stupid,' Trump said, noting that the drone was unarmed and had no pilot. 'It was a very foolish move, that I can tell you.'

Trump assured that the situation is 'all going to work out.' And with the 2020 elections looming, he picked up a refrain from his first campaign, telling reporters: 'I want to get out of these endless wars, I campaign on that.'

The drone incident has caused the volatile situation in the region to deteriorate even further -- and comes as lawmakers on the Hill are expressing alarm that the administration may try to find a way to declare war on Tehran without consulting Congress.

Trump has tightened sanctions on Iran after withdrawing from the Obama-era nuclear deal last year, targeting the country's crucial oil sector in May. The President has also sent a Navy strike group to the region and announced this week the deployment of 1,000 troops to the Mideast 'for defensive purposes.'

An official told CNN that Trump was attending the meeting to mull responses to Iran's action this morning, along with Secretary of State Mike Pompeo and Vice President Mike Pence.

About an hour after Trump's tweet on Tehran's 'mistake,' Iranian foreign minister Javad Zarif sent his own tweet, saying: 'The US wages #EconomicTerrorism on Iran, has conducted covert action against us & now encroaches on our territory. We don't seek war, but will zealously defend our skies, land & waters. We'll take this new aggression to #UN & show that the US is lying about international waters.'

Zarif provided no explanation about the covert activities.

The White House sent officials to brief Republican and Democratic leaders, as well as senior members of Congress, on the latest development. Senior aides on the Hill told CNN that congressional leaders would also get a second briefing in the White House Situation Room later Thursday.

Leaving the Capitol Hill briefing, House Speaker Nancy Pelosi told CNN, 'we have to de-escalate. That's what we have to do. The high tension wires are up in the region. We must de-escalate.'

Before the briefing, Pelosi had told reporters that 'it's a dangerous situation' in Iran.

'I don't think the President wants to go to war. There's no appetite for going to war in our country,' she said.

In contrast, Republican Sen. Lindsey Graham of South Carolina issued a fiery warning after the briefing.

'Iran needs to get ready for severe pain,' Graham said. 'We are a lot closer today than yesterday. God knows what tomorrow brings.'

At the same time, Trump has sought to calm nerves, and continues to privately express wariness at wading into another foreign conflict.

Thursday's developments will put Trump's assertion to the test.

Lt. Gen. Joseph Guastella, commander of the US Air Forces Central Command, told reporters the Iranian shoot-down of the drone was 'an unprovoked attack on a US surveillance asset that had not violated Iranian airspace at any time during its mission. This attack is an attempt to disrupt our ability to monitor the area following recent threats to international shipping and the free flow of commerce.'

While Iran has said the shootdown occurred in Iranian airspace, Guastella said that is 'categorically false.'

'The aircraft was over the Strait of Hormuz, and fell into international waters,' Guastella said. When it was shot down, the drome 'was operating at high altitude, approximately 34 kilometers from the nearest point of land on the Iranian coast,' he said.

'This dangerous and escalatory attack was irresponsible and occurred in the vicinity of established air corridors between Dubai, UAE, and Muscat, Oman, possibly endangering innocent civilians,' Guastella said.

For Trump, the situation will provide a test of his willingness to engage Iran after weeks of escalation, including attacks on oil tankers in the Gulf that the administration has blamed on Iran and which Tehran categorically denies.

Trump has raised the prospect of talks with Iran more than once -- striking a more conciliatory note that his senior security officials. In May, Trump said that if Iran called, 'we would certainly negotiate, I only want them to call if they're ready.'

Earlier in the month, he had said that what Tehran 'should be doing is calling me up,' and on May 16 Trump said that he not only hoped the two countries don't go to war, but that he was sure 'Iran will want to talk soon.'

In meetings with his national security team over the past several weeks, Trump has maintained his skepticism toward going to war with Iran, telling advisers he isn't interested in sending American troops into another engagement in the Middle East.

He has also told his team that regime change should not be in the cards -- a position he reiterated during a news conference in Japan at the end of May.

That stance has sometimes been at odds with other members of his national security team, including Bolton and Pompeo. Both have offered hawkish warnings to Iran over its behavior.

Officials said Trump is not overly concerned with the rhetoric coming from his team, despite frustrations earlier this spring that his advisers appeared to be getting out ahead of him.

Despite efforts by Pompeo and the Pentagon to demonstrate Iran's malign activities by releasing evidence they claim shows Iran was behind the tanker attacks, the White House posture in response to these incidents has been less urgent.

One official said that is primarily because the President has not viewed these latest incidents as being enough of a trigger for escalation with Iran.

It wasn't yet clear whether the downing of the US spy drone would provide further impetus for escalation. A second official said Trump, while keeping a close eye on the situation, has not voiced a firm view of how he wants to proceed going forward -- instead asking for options without stating what his preferred end goal might be.

In an interview with Time magazine this week, Trump laid out in greater specificity what kind of provocation would justify military action in his mind.

'I would certainly go over nuclear weapons ... and I would keep the other a question mark,' Trump said.

A second source with knowledge of the situation told CNN that the administration believes Iran is targeting oil tankers in an effort to 'impact the oil market' and provoke Trump over an issue that they know he cares about.

'With mines placed above the water, they knew this wasn't going to have a lot of collateral damage,' the source said. 'It's symbolic, and it was to affect the markets, but it hasn't had much effect.'