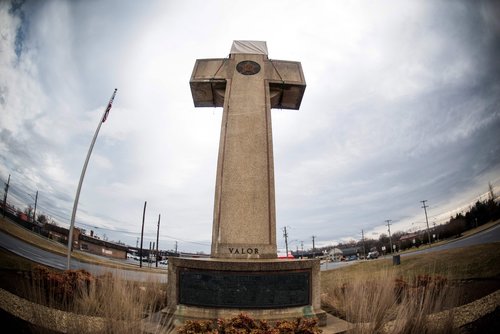 The Supreme Court said on Thursday that a 4...

The Supreme Court said on Thursday that a 40-foot cross on public land in Maryland that was built to honor fallen soldiers in World War I does not violate the separation between church and state and can remain standing.

Although the justices differed on their rationales for upholding the cross, Justice Samuel Alito, writing the opinion of the Court in part, based his conclusions on the fact that the cross 'carries special significance in commemorating World War 1.'

'The cross is undoubtedly a Christian symbol, but that fact should not blind us to everything else that the Bladensburg Cross has come to represent,' Alito said.

Alito stressed that the monument is a 'place for the community to gather and honor all veterans and their sacrifices for our nation.'

He said that 'destroying or defacing the Cross that has stood undisturbed for nearly a century would not be neutral and would not further the ideals of respect and tolerance embodied in the First Amendment.'

Justice Ruth Bader Ginsburg dissented from the 7-2 ruling in the case. Her voice was clear, with barely a trace of the hoarseness she had on Monday, as she read her dissent from bench, wearing her famed dissent collar. She has said in public appearances she chooses to read dissents from the bench only when she believes that a majority's opinion is particularly egregious.

'Just as a Star of David is not suitable to honor Christians who died serving their country, so a cross is not suitable to honor those of other faiths who died defending their nation,' Ginsburg wrote in her dissent, joined by a fellow liberal, Justice Sonia Sotomayor. 'Soldiers of all faiths 'are united by their love of country, but they are not united by the cross.''

Ginsburg also took the unusual step of including pictures in her opinion depicting the large size of the Bladensburg cross and how it dominates a highway intersection on public ground. She also included a picture of a head stone in the Henri-Chappelle American Cemetery and memorial in Belgium depicting a sea of crosses but also a headstone with the Star of David.

In handing down the opinion, Alito noted that he and his colleagues had been 'quite prolific' in writing, as they gave differing rationales for upholding the cross.

Justice Stephen Breyer wrote separately, joined by Elena Kagan, to emphasize that while the court's opinion looked to a 'history and tradition test' for a cross that had a 'long-held place in the community' he did not believe that a 'newer memorial' that was 'erected under different circumstances' would be permissible.

Writing alone, Kagan endorsed much of Alito's opinion saying that it 'shows sensitivity to and respect for this Nation's pluralism, and the values of neutrality and inclusion that the First Amendment demands.'

And Justice Brett Kavanaugh said he joined Alito's opinion in full but wanted to stress that he had 'great respect' for Jewish war veterans who argued that the cross on public land sends 'a message of exclusion.'

'I recognize their sense of distress and alienation,' he wrote. Kavanaugh added that while he voted to uphold the constitutionality of the cross, he also wanted to 'restate this bedrock constitutional principle: All citizens are equally American, no matter what religion they are, or if they have no religion at all.'

Steve Vladeck, CNN Supreme Court analyst and professor at the University of Texas School of Law, said it's unclear how the justices would handle similar cases in the future.

'Although the Court was clear that the Peace Cross does not offend the Establishment Clause, the seven justices in the majority divided as to why -- in a way that makes it difficult to predict how the Court would handle future challenges to religious displays on public property with at least some claim to a secular, historical purpose,' Vladeck said.

The Trump administration welcomed the ruling.

The American Legion built the so-called 'Peace Cross' in 1925 to honor 49 local men who died serving in World War I. Mothers of the fallen soldiers designed the memorial to mirror the crosses that mark graves in American cemeteries overseas.

'This Memorial Cross Dedicated to the Heroes Of Prince George's County who gave their lives in the great war for the liberty of the world,' a plaque reads.

The cross was deeded to the Maryland-National Capital Park and Planning Commission in 1961, after a highway was built around it. It stood without conflict until 2012, when nearby residents sued, arguing that they are offended by the government's endorsement of religion and the fact that the cross is maintained with taxpayer money.

Fred Edwords and Steven Lowe, with the support of the American Humanist Association, challenged the cross.

'As a memorial to all veterans, it only seems to represent -- the cross -- Christian veterans,' Lowe told CNN in an interview.

'I'm not offended by the cross per se. What offends me is that it's on government land promoting government endorsement of religion, and it's not my religion,' Edwords said.

Edwords and Lowe lost when a district court upheld the cross. But in 2017, the Fourth US Circuit Court of Appeals ruled 2-1 to reverse the decision, saying that the government had 'excessively entangled itself with religion.'

In court, Monica L. Miller, a lawyer for the American Humanist Society representing the men, argued the memorial should either be moved to private property or modified.

But Stan Shaw and Mike Moore, both of American Legion Post 131, told CNN they were concerned that if they lost in court it will end by people trying to 'take down every reference to God, every cross in every memorial that exists in the country.'

Kelly Shackelford, counsel representing the American Legion, called it a landmark decision on religious liberty saying, 'All of these illegitimate uses of the Establishment Clause to attack our religious monuments, heritage, memorials is over.'

Mike Moore, a member of the American Legion, said on the steps of the court moments after the opinion came down, 'We're very, very happy that the memory of and the sacrifice and service of those 49 members of the service from Prince George's County will not be destroyed or bulldozed.'