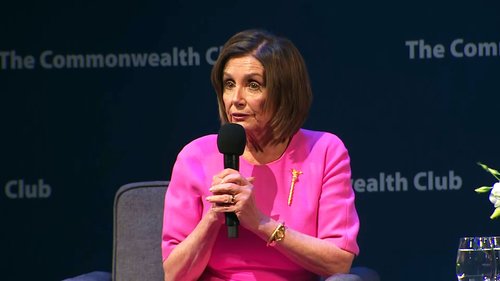 House Speaker Nancy Pelosi said on Wednesday that she is not considering censuring President Donald Trump for his conduct, arguing that if the House of Repre...

House Speaker Nancy Pelosi said on Wednesday that she is not considering censuring President Donald Trump for his conduct, arguing that if the House of Representatives were to reprimand him for alleged wrongdoing it would impeach him for those crimes.

"I think censure is just a way out," said Pelosi at a Christian Science Monitor breakfast with reporters. "In other words, if the goods are there, you must impeach."

Censure is a rare, formal rebuke Congress can take against the President, but a less severe punishment than impeachment, which could lead to his removal should two-thirds of the Senate find him guilty.

"Censure is nice but it is not commensurate with the violations of the Constitution should we decide that's the way to go," she added. "That's a day at the beach for the President, or at his golf club or wherever he goes."

But Pelosi maintained the House should not open an inquiry to consider impeaching the President "unless you're ready to" do so. The speaker has been clear that she does not want the Democratic-led House to impeach Trump only to see the Republican-led Senate acquit him of the charges.

"If you're going to go down this path, you have to make sure that the public has an understanding of why," said Pelosi.

The number of House Democrats who support opening an impeachment inquiry continues to grow after special counsel Robert Mueller released his report detailing multiple episodes of potential obstruction of justice into the investigation of Russian interference in the 2016 presidential campaign. A CNN list shows that at least 69 out of a caucus of 235 — just under 30% — support it.

Pelosi said on Wednesday that impeachment isn't about politics or partisanship but patriotism before asserting that there would in fact be a political cost to opposing it.

She said that if the President is impeached, senators considering the charges would understand that "they either honor their oath of office to protect and defend the Constitution of the United States" or "the public will hold them accountable for not holding the President accountable."