As New York struggles to undo the lies of anti-vaxers, moms step in to help 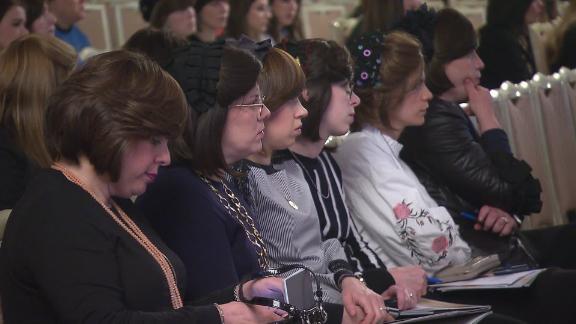 After anti-vaxers spread misinformation in New York's ultra-Orthodox Jewish community, a local group of women stepped up to educate mothers on the facts about vaccination.

There's no question: The ongoing measles outbreak in New York is in a league of its own.

As of the outbreak's ninth month, more than 800 people in the state have become sick, and New Yorkers have infected people in four other states.

Around the United States, there have been 1,022 cases of measles in 28 states this year as of Friday, according to the US Centers for Disease Control and Prevention.

To put New York's number in perspective, it's huge: The next largest measles outbreak in the United States in the past 20 years was less than half that size and lasted less than half as long.

That leaves some residents and public health experts questioning whether New York officials have taken the right steps to get this outbreak under control.

New York's effort thus far 'doesn't feel sufficient anymore,' a federal health official told CNN. 'You've had eight months of sustained transmission and most people would agree you're not ahead of it.'

While observers said New York officials have worked long and hard at quelling the outbreak, they pointed out some areas where there have been missteps.

First, public health experts criticized the state for allowing children to go to school even if they're not vaccinated.

Second, some say health authorities in the state waited too long before asking the federal government to send in help.

Third, there are concerns state authorities botched some of the pro-vaccination messaging.

Finally, a doctor writing in the New England Journal of Medicine said New York City's decision to fine residents who don't vaccinate may have backfired.

The ramifications of losing the war against measles in New York are significant.

If the outbreak continues into the fall, the United States could lose its measles elimination status, which was conferred by the World Health Organization in 2000.

'That loss would be a huge blow for the nation and erase the hard work done by all levels of public health,' US Centers for Disease Control and Prevention officials wrote in a statement.

Even worse, the New York measles outbreak has taken a human toll. Some 56 patients, mostly children, have been hospitalized with the disease. Fifteen of those patients were so sick they ended up in the intensive care unit.

'We are now countering not only the vector of the measles virus, but we're countering the vector of the anti-vaxers, and that message - that insidious message -- is just as challenging as the most contagious virus on the face of the earth,' said Dr. Oxiris Barbot, the commissioner of the New York City Department of Health and Mental Hygiene.

New York health authorities face an additional challenge: ultra-Orthodox Jews travel frequently to Israel and Europe, where there have been more than 100,000 measles cases this year.

When the Disneyland measles outbreak occurred in California in 2014, the state moved swiftly. Within a few months, lawmakers introduced and passed legislation getting rid of religious and philosophical exemptions for vaccines. Now, schoolchildren in California have to be vaccinated unless they have a medical excuse.

Similar bills have languished in the New York legislature since January.

'Our state's inaction in the face of such an overwhelming public health emergency is appalling,' said Brad Hoylman, a state senator who is co-sponsoring the New York bill.

When states experience outbreaks they can ask for staffers from the CDC to come in and help. The agency can send in staffers, such as their 'disease detectives' from the Epidemic Intelligence Service, to help bring the outbreak under control.

But the CDC can't just march in -- they have to be invited. New York state didn't request for such help until April, about seven months into the outbreak. New York City still hasn't asked for CDC personnel.

'I don't know why you wouldn't want to be the local public health leader who stands up and says they've exercised the option to call CDC and they are coming,' the federal official said.

'I think these are local issues that rely on trust between officials and local community. CDC role is to strengthen that relationship and get info out,' the official added.

Spokespersons for the New York State Department of Health did not respond to requests for comment on this story.

Barbot, the New York City health commissioner, said her department is in almost daily contact with the CDC, and has sent specimens to the CDC's laboratories, but that they don't need CDC staffers to come to New York.

'I have more than 400 people working on this outbreak,' she said. 'On a daily basis the New York City Health Department is putting the best and brightest people to work on maximizing the number of New Yorkers that are vaccinating, that we track down every individual potentially exposed to any incoming cases of measles, and we are working hard, day and night, to make sure we bring this to an end.'

When the anti-vaxers targeted the ultra-Orthodox Jewish community, they knew exactly what they were doing. To help plant fear directly into mothers' hearts, their publications contained religious references and include illustrations of mothers and children wearing clothes typical of religious Jews.

New York state countered these booklets with posters in Yiddish -- but botched the translation so badly that parts of it are incomprehensible.

Gary Holmes, a spokesperson for the New York State Department of Health, previously told CNN the posters were 'a small part' of the state's effort to fight the outbreak.

He said looking at the bigger picture, the state health department has worked extensively with rabbis, community leaders, and health care professionals in the ultra-Orthodox Jewish community to get the message out that measles can be dangerous and vaccines are safe.

That's why, this week, a group of New York women -- doctors, nurses, and health care advocates -- organized an event just for women.

The event was the first of its kind and the goal was clear: Speak directly to the fear planted by the anti-vaxers.

'A mother's fear is probably one of the strongest emotions that exists,' said Shoshana Bernstein, one of the organizers of the event.

Tables were arranged in the back of the room, each labeled with a different anti-vaxer myth, such as that vaccines cause autism or SIDS. Doctors and nurses sat at the tables, ready to myth-bust.

Meanwhile, physicians and nurses from within the Orthodox community explained the real fear: that a child could die from a vaccine-preventable disease.

Dr. Maureen Nemetski, a pediatrician, described to the audience how she tried to save the life of a baby who was too young to be fully vaccinated against pneumococcal infection.

'I drilled a hole into her shin bone and placed an intraosseous line -- a bone catheter -- so that we could inject platelets and medications into her blood through her bone marrow. I cannot imagine her parents' horror on hearing the crack of the drill bit into their baby's leg,' she said.

'We took turns pounding on this baby's chest and trying to pump air into lungs that had filled with blood,' Nemetski continued. 'We cried as we realized we couldn't bring her back. We couldn't save her.'

Authorities could take a page out of this playbook, according to the physician who wrote the recent article in the New England Journal of Medicine.

'They offered information from people who are trusted within the community. They were non-threatening, they were influential, and that's exactly the kind of move that should be made,' said Dr. Julie Cantor, a physician and attorney.

Cantor's journal article criticized the New York City Department of Health for fining residents of outbreak areas $1,000 if they don't get vaccinated.

'Evidence on health-related behavior suggests that people respond poorly to directives,' wrote Cantor, an adjunct faculty member of the UCLA School of Law. 'Force, whether economic or physical, does not educate, develop trust, or protect human dignity. And it will never be an antidote to fear.'

New York City, however, says their tactics -- including the fines and community education -- have worked.

Vaccination rates have increased dramatically both in New York City and in Rockland County. And in May, for the first time this year, the number of new measles cases was headed down.

'We've been able to leverage all the tools at our disposal in a way that has really turned this outbreak around,' said Barbot, the city health commissioner.

When asked whether she thought the outbreak would end by the fall in order to keep the country's measles elimination status intact, Barbot didn't answer.

'We are working every day, day and night, to ensure that we get the message out that vaccines are safe, effective, and the best way to keep families and communities safe,' she said.