2 more dead gray whales have been found in Alaska, bringing the year's toll to 75 along the US West Coast 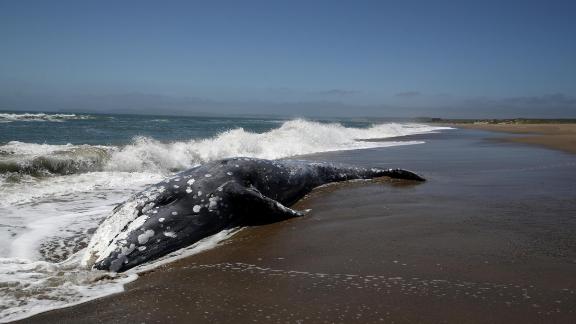 More than 70 whales have been found dead along the West Coast and scientists don't know why, but initial findings suggest that the gray whales are dying from starvation.

Two more gray whales were found dead this week in Alaska amid the mysterious surge of deaths within the species this year along the US West Coast, CNN affiliate KTUU reports.

That makes seven in Alaska and at least 75 total, in what the National Oceanic and Atmospheric Administration calls an "unusual mortality event," the station reports.

One of the two found near Kodiak Island in the Gulf of Alaska showed signs of killer whale "predation," KTUU reports.

Two more were discovered this week off Washington state.

Last month, ocean scientists said they were worried about the death rate, the highest in almost two decades. Some of the mammals were underweight, which may mean they could not find enough food in the water, a possible result of climate change, NOAA spokesman Michael Milstein said.

In all of last year, 45 gray whales were found onshore, NOAA said.

Gray whales do most of their eating during summers in the Arctic and migrate to spend half the year in Mexico.