Farmer rescued from grain silo: 'I thought for sure that this was the end of my life' 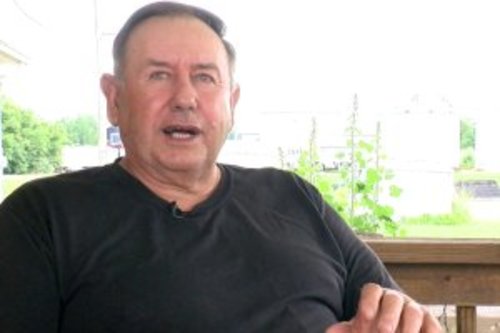 Ross Township (WCPO) -- When 71-year-old Jay Butterfield climbed into the stiflingly hot grain silo on his family’s farm Thursday afternoon , it was to un-jam a piece of clogged equipment. The auger, a helical rod that helps move grain in and out of the silo, was stuck; the soybeans it was meant to move were instead piled high against one wall.

He fixed the problem too well, he said Friday night.

When he felt the ground drop under his feet, Butterfield had very little doubt he would die — then, there, suffocated under a tide of soybeans.

His terror was well-founded: A person who falls into moving grain can be completely engulfed within moments, trapped by the enormous pressure exerted by multiple tons of grain and sucked further down the harder they struggle. About half of all grain entrapments end in the victim’s death.

Butterfield sank in to his knees first. Then his waist.

"I thought for sure that this was the end of my life," he said.

He started to scream.

His brother-in-law, working nearby, heard him and called 911, but he remained terrified even as firefighters and emergency medical converged on the scene.

“Keep calm,” they told him as they peered in from the top of the dome. “Don’t move.”

He couldn’t have even he wanted to.

“It felt like cement going around you and packing you real tight,” he said.

Butterfield was buried up to his chest by the time rescuers lowered oxygen and an air hose into the silo to prevent him from suffocating or overheating.

They put a harness on him, too, but decided against using it. The amount of force needed to beat the suction exerted by tons of grain is typically more than the human spine can withstand.

Instead, they needed to break the vacuum seal by placing a series of metal sheet barriers around Butterfield’s body, lessening the amount of pressure on him.

He was still terrified.

“I thought they weren't going to get them boards here fast enough to get me before the rest of the beans come down,” he said.

The rescue took three hours from start to finish. It seemed like many times that to Butterfield, sweating and worrying in the near-dark.

"Three hours seemed like 10 hours," he said. "That was the longest three hours I ever had when you think you're going to die."

Butterfield was uninjured and back on the farm by Friday, leading a reporter and cameraman by the now-empty silo where he had been convinced he would die. Despite the dangers of his work, he said, "I like to farm and I like to see things grow." Even after his scare Thursday, he was happy to return.

"Everybody wants to live — I think most people,” he said. “I wasn't quite done farming yet. I think I want to farm for a long time."