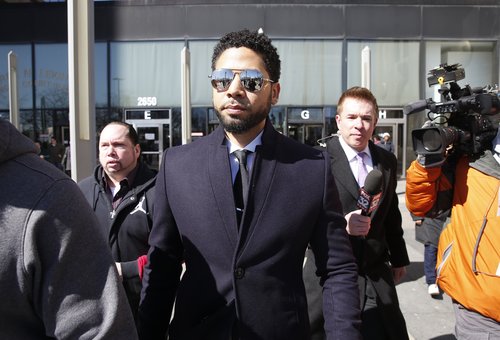 A week after actor Jussie Smollett turned himself in to Chicago authorities in late February, the Cook County State's Attorney's Office told police they coul...

A week after actor Jussie Smollett turned himself in to Chicago authorities in late February, the Cook County State's Attorney's Office told police they could no longer investigate the hate crime turned false report case, according to police documents released Thursday.

It was a month later in March when prosecutors announced they were dismissing the 16 charges against Smollett, saying the "Empire" actor forfeited his bail money and had done community service.

Smollett had told police that two attackers yelled racist and homophobic slurs at him, tied a rope around his neck and poured an unknown substance on him.

But after an extensive investigation, Chicago Police Superintendent Eddie Johnson said Smollett paid two brothers $3,500 to stage the attack and take "advantage of the pain and anger of racism to promote his career."

The case was national news for weeks and the dismissal of charges prompted critics to say the office of Cook County State's Attorney Kim Foxx was treating Smollett differently because he is a celebrity.

In the new documents, Smollett's attorney Tina Glandian pointed to two witnesses who said they saw at least one white man near where Smollett said he was attacked.

One was a woman walking her dog at 12:30 a.m. and said she saw a white man who appeared to have a rope underneath his jacket. The man looked away when the woman looked at him, she told detectives.

Another was a security guard at a hotel who saw a white man wearing a ski mask at 2 a.m., around the time of the alleged incident. The guard said another man ran by, pointing to the other man in the mask.

"This is the first time we are seeing any of this," Glandian wrote in an email.

As the investigation into his claims of a hate crime attack had progressed, Smollett was asked by police whether two brothers could be the perpetrators.

No, he said, according to police documents, because there were "black as sin."

Smollett said he had no issues with the brothers

Smollett told police at the beginning that he was attacked in the early hours of January 29 by two white men.

When questioned February 14 about the brothers, who at the time were in police custody, Smollett, who is gay, said he didn't have any issues with them.

"They are straight so we don't have any problems with women or men," he said. "They did not owe me any money, I don't owe them any money. We have a good relationship."

The case file also has details about the "unknown chemical substance" police said the "Empire" actor claimed was poured on him during the attack.

The two brothers confessed to their involvement in the alleged plot, with one saying he filled a hot sauce bottle with bleach and poured it on Smollett.

That container was found at the scene of the alleged attack, police said.

Police have previously alleged that text messages show Smollett bought drugs from one brothers. In the documents, they said those drugs included marijuana, ecstasy, and cocaine.