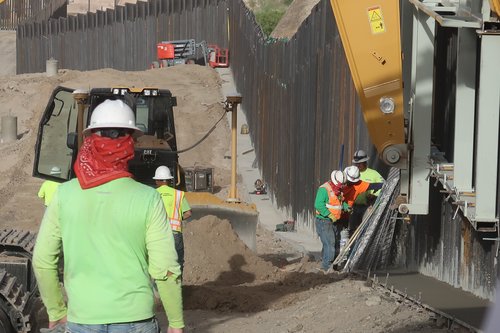 City officials in Sunland Park, New Mexico, have delivered a "cease and desist" order to the owners of land where a private border wall is being built....

City officials in Sunland Park, New Mexico, have delivered a 'cease and desist' order to the owners of land where a private border wall is being built.

'The rules apply to everyone,' Ibarbo said. 'That's the process.'

The city's chief inspector is scheduled to visit the site Wednesday to help determine the next steps, Ibarbo said.

Brian Kolfage, whose GoFundMe campaign raised more than $20 million to build the wall on private property, disputed the city's assessment, describing the 'cease and desist' order as political intimidation.

Construction at the site halted Tuesday after the order was received, Kolfage said, and attorneys for his group, We Build the Wall, met with city officials about permits Tuesday evening.

The city ultimately thought the site plan 'wasn't good enough,' Kolfage said. 'We are redoing that. It's engineering for the layout of the land. It shows topography.

'What we really think it is, we think it's a political issue. People are raising a fit about this. People don't like that it's happening,' he said. 'That's why we waited as long as we did to file the paperwork.'

Kris Kobach, general counsel for We Build the Wall, said in a statement that building, development and rock wall permits had been filed, and that city inspectors had given the project a green light before Memorial Day weekend.

'We were then instructed by the same city officials that we were good to proceed with construction over the holiday weekend and that we would not have any issues being shut down,' Kobach said.

Sunland Park City Manager Julia Brown told CNN the city's 'cease and desist' order has nothing to do with politics.

'There is no political motivation on the part of the city, simply our interest in having our code and ordinances complied with,' she said.

'This applicant is not being treated any differently from any other applicant in that all applicants are expected to comply with the law. We don't selectively enforce the law, do not show favoritism or ignore our own laws.'

On Monday, We Build the Wall trumpeted its swift efforts to build a half-mile stretch of wall on private property, and pledged to continue its efforts on other sites.

Kolfage said word of his project's progress spurred an increase in donations this week.

He pushed back against critics who've noted the privately funded wall doesn't sit directly on the border and who've dismissed the effort as 'theater.'

'It's protest wall,' Kolfage said. 'We are standing up. We are saving lives. It's stopping the flow of drugs and illegal migrants.'