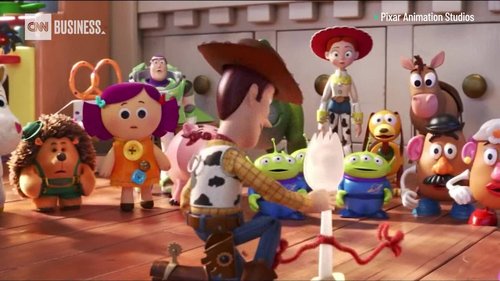 Grab the Kleenex, because it sounds like "Toy Story 4" will have you blubbering.Tom Hanks, who has voiced Sheriff Woody, the sweet animated cowboy in...

Grab the Kleenex, because it sounds like "Toy Story 4" will have you blubbering.

Tom Hanks, who has voiced Sheriff Woody, the sweet animated cowboy in the beloved Pixar franchise since 1995, said fans need to brace themselves when it all comes to an end in just a few weeks.

During an appearance on "The Ellen DeGeneres Show" on Wednesday, Hanks revealed that Tim Allen, who voices Buzz Lightyear, warned him before he went in to record his lines that it was going to be a tear-jerker.

"This is the end of the series and I had gotten some texts from Tim Allen. These texts that say, 'Have you recorded yet? Have you been in? Have you had a session yet?'" Hanks told DeGeneres. "I said, 'No, not yet.' [Allen says] 'Wait until you see those last pages. Tough one, tough one.'"

Hanks added, "And it was! The last few sessions we're saying goodbye to Woody and Buzz and Bonnie's room and Andy and everybody."

The film follows Woody's (Tom Hanks) quest to find Forky after he escapes. All your favorite characters are back: Buzz Lightyear, Rex, Slinky Dog, Hamm the Piggy Bank, Bo Peep, and Mr. and Mrs. Potato Head. Keanu Reeves also makes his debut in the franchise with another new character, Duke Caboom.

"The world of 'Toy Story' is built upon the idea that everything in the world has a purpose," director Josh Cooley told Entertainment Weekly in November. "A toy's purpose is to be there for its child. But what about toys that are made out of other objects? Forky is a toy that Bonnie made out of a disposable spork, so he's facing a crisis. He wants to fulfill his purpose as a spork, but now has a new toy purpose thrust upon him."

The film is set to open in theaters June 21.