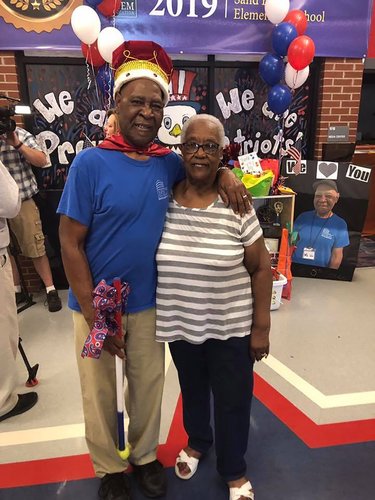 Chants of "Mr. John! Mr. John!" drowned out Kool & the Gang's "Celebration" as 83-year-old school custodian John Lockett stepped into a corridor lined with a...

"It really was a surprise to me" John Lockett told CNN about the unexpected tribute. "Tears came rolling down my face. I didn't know if I'd be able to walk down the hall."

For the past six years, "Mr. John" Lockett has swept, mopped and quietly kept things in order at Sand Hill Elementary School in Carroll County, Georgia. He's worked for the county school system for 12 years total.

Now he's hanging up his broom. The school's grateful students honored him with a surprise celebration Friday, declaring it "Mr. John Day."

He's been a hard-working role model

"We just wanted to find a way to honor him," Sand Hill Principal Carla Meigs told CNN about the grandfatherly figure.

"He's a role model for the students. He is the epitome of a hard-working human being who has been put on this earth to serve others."

Lockett had struggled with health problems last year, and Meigs wanted him to retire in December. But he insisted on working until the end of the school year and finishing with the students.

For him, it was all about the children.

"Oh shucks, I love the kids so much," Lockett told CNN. "There's so much I didn't do in my younger days. I had to find a way to make my life mean something. I made it my business to be a good steward. I want to make the kids the heroes."

He got a crown, a cape and a welcome surprise

On the day of his celebration the unsuspecting Lockett was asked to come in a little early. The faculty and students wanted to make sure there was enough time to fully recognize his service before school let out for the day.

Teachers and administrators placed a crown on Lockett's head and draped a cape around his neck. Then they opened the door to the hallway where students and staffers were lined up, ready to greet him. Lockett was overwhelmed with cheers.

A big smile spread across his face. Someone handed him an empty basket. As "Mr. John" headed down the hall, high-fiving and greeting everyone, students filled the basket with notes, pictures and gift cards. It was truly a sendoff fit for a king.